Tom assembles a team to go to the supermarket as the camp is running out of food. Our heroes' lives are put at risk along the way. 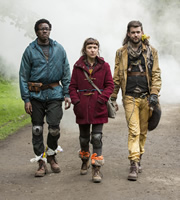 Tom assembles a team to go to the supermarket as the camp is running out of food. As Oscar is the only man who knows the way there, he joins the road trip.

Out in cannibal country, they discover terrified old children's entertainer Stevie Giggle, who warns them of Spectrum, a gang of cannibal women roaming the countryside and preying on unfortunate victims.

Will the gang make it back alive?