A heavily pregnant Sharon picks Rob up at the airport and tells him she's invited an old friend from Ireland to be her maid of honour at their wedding.
Preview clips 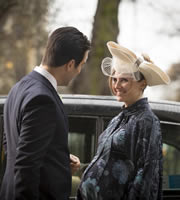 Rob decides to ask Sharon's brother Fergal to be his Best Man and learns that Fergal's wife has left him and taken their kids. Rob and Sharon enjoy their stag and hen nights, both of which spiral out of control.

Rob asks Fergal to be his best man... but soon suspects something is wrong.