Sharon faces the reality of having a giant new room-mate in the form of Rob, the man whose child she happens to be carrying. 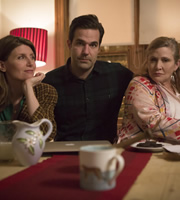 Sharon introduces Rob to her brother Fergal who gives them both a royal hard time.

Rob connects with an old school pal Dave, who's evolved into a delightful scumbag. Rob then endeavours to cook up a proper proposal to help Sharon feel better about the clumsiness of their situation.