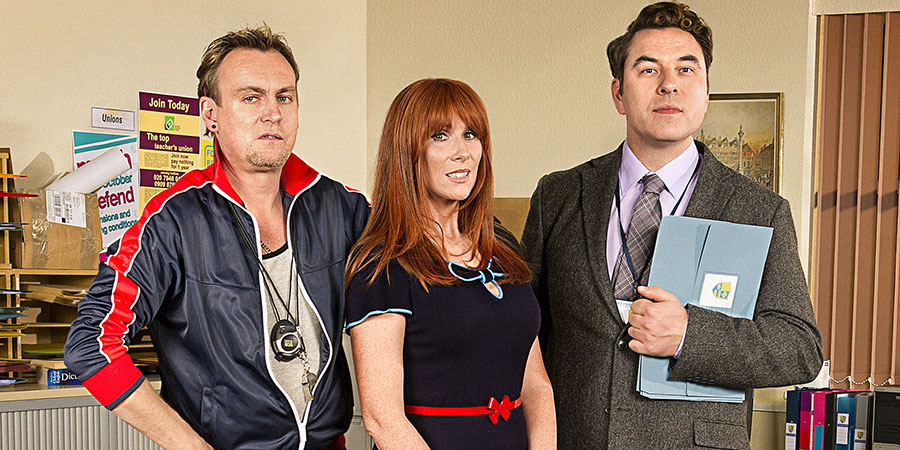 Sitcom about the dysfunctional staff room, unrequited love and interactive whiteboards of an urban secondary school

Set in an urban secondary school, Big School is a comedy about a dysfunctional staff room, unrequited love and interactive white boards.

Chemistry teacher Mr. Church is hopelessly in love with the school's new French teacher, who in turn is being chased by a lothario gym teacher.

David Walliams is 40-something chemistry teacher Mr Church, who has taught at Greybridge School for years. Catherine Tate plays the school's enthusiastic new recruit, Miss Postern, who despite being a French teacher has never actually been to France.

Joanna Scanlan plays Mrs Klebb, the nosey and interfering drama teacher, while Steve Speirs plays Mr Barber, the pessimistic geography teacher who's counting down the days until he can retire.

Finally, Daniel Rigby plays Mr Martin, the mod-like music teacher who desperately wants to be mates with the kids and still clings to his dream of becoming a rock star.

Series 2: In the second series the main characters return, plus we're introduced to sexy new teacher Dr Dalton (Jimmy Akingbola) and Fenella Forbes (Morgana Robinson), a best-selling children's author who arrives to give the pupils some advice on careers day.

Other characters who will appear include no-nonsense OFSTED Inspector Mrs Steele (Sylvestra Le Touzel), new pupil Dean (Jack Carroll), Mr Gunn's long-suffering mother (Michele Dotrice) and Trish (Karen Taylor), the mother of one of the pupils at the school.