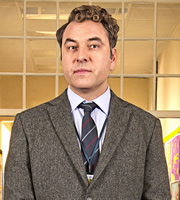 Deputy Head of Science, Mr Church has been at Greybridge School for 15 years. Disillusioned with teaching, he is about to resign after a particularly dramatic experiment with liquid nitrogen and 1000 ping pong balls is met with apathy by his pupils.

However, the arrival of new French teacher Miss Postern changes everything - and Mr Church's resignation letter goes in the bin. He's socially awkward, but the presence of Miss Postern brings out the romance in his soul. Perhaps a lift home is the way to her heart? The course of true love never did run smooth - particularly in an Austin Maxi. 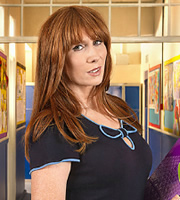 Greybridge School's new French teacher Miss Postern has arrived to take up her post following the tragic death of her predecessor. She's determined to make a difference in the classroom with new teaching methods - anyone for Vocab Tennis?

Her guilty secret (revealed to Mr Church) is that she has never been to France. Sometimes she thinks, "To hell with it Sarah, jump on the ferry and go for the day!" As Mr Church says, she's such a free spirit. 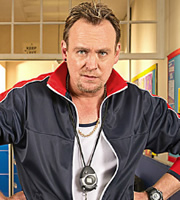 PE teacher and would-be lothario Mr Gunn is also interested in the new French teacher - and most of the other female teachers in the school.

The alpha male of the Greybridge staff room, which isn't saying much, Mr Gunn lives in a world where Jeremy Clarkson is a revered philosopher and living with your mum despite being middle-aged is totally fine - "She does all the cooking, all the washing, all the cleaning. I'm living the dream."

Mr Gunn is determined to "plough" Miss Postern - probably on Friday night when his mum is at seniors' zumba.

In Series 2, Trevor becomes a Geography teacher... which is a bit of an issue as he can't even pronounce the subject's name properly and his idea of teaching the pupils about other countries is to put a Top Gear travel special on the telly. 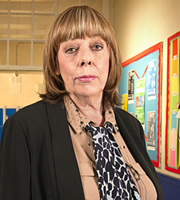 Greybridge's no-nonsense Head Teacher Ms Baron runs the school with a rod of iron and a kingsize cigarette. She sees both staff and pupils at Greybridge as hindrances to her life; she rarely leaves her office and never lets anyone sit on her newly re-upholstered chairs.

Any alcohol confiscated from the pupils goes straight into the boot of her car as a perk of the job, and her attitude to drugs is not necessarily advocated by OFSTED.

The staff seem to give her as much trouble as the pupils. "This is a new low for the school - and believe me there have been some quite startling lows." 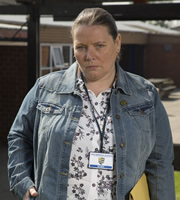 Mrs Klebb's life revolves around teaching drama and spending time with her partner Frieda (Mr Gunn: "When it comes to lesbians the internet is very misleading").

Mrs Klebb directs radical adaptations of the classics but drama's not only what she teaches, it's also what she likes being a part of in the staff room - "I'm not earwigging, I'm just toasting some gluten free bread".

In fifteen years of theatre reviewing for the school magazine, Mr Church hasn't written anything remotely pleasant about her work. 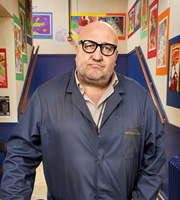 Geography teacher Mr Barber has been having a textbook nervous breakdown for the last two years. His wife's left him, the bailiffs have taken the TV from his caravan and he's desperate to negotiate himself some long-term paid sick leave.

In Series 2, he has indeed been though the inevitable breakdown and thus is banned from teaching. He now acts as the school caretaker - he seems happy in the role, but isn't getting enough to eat now he no longer gets free school meals. 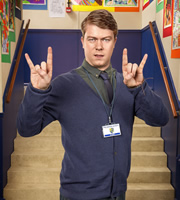 Music teacher Mr Martin likes to liven up his music classes with some of his own compositions - "Mozart? Yawnsville. No beat."

Being a teacher is really just a stepping stone to becoming a singer-songwriter like his musical soulmate 'Eddie' Sheeran. But his guitar playing is rudimentary, his lyrics are hamfisted and his musical knowledge isn't as good as you'd expect. 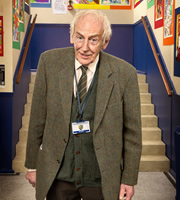 Elderly Head of Science Mr Hubble is frequently confused. As his superior, Mr Hubble is the one man standing between Mr Church and the position of department head. However, Mr Hubble's not as sharp as he used to be and often walks into Mr Church's class and starts taking the lesson as if they were his own, and occasionally mistakes Ms Baron's office for the gents.

Mr Hubble dies during the second series... but it takes the staff a while to realise. 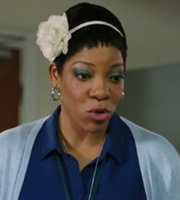 Daphne is Ms Baron's secretary. She is cheerful and happy in her Admin Assistant role... but she doesn't always seem to have her mind on the job. For example, she forgets the name of her boss sometimes (resulting in her referring to Baron as "the main teacher woman").

Daphne doesn't seem to have much tact, which is a shame given one of her roles is to summon teachers to see Ms Baron for a telling off. 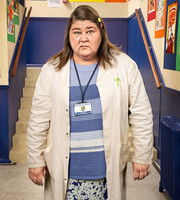 Jo turns out to be a bit of a pest when it comes to Mr Church. She never says anything - which is slightly alarming, but reveals herself to have a beautiful singing voice at Mr Hubble's funeral. 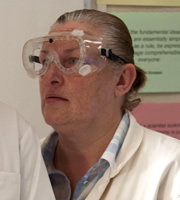 Mr Church's loyal lab assistant Pat never speaks, but her actions make it quite clear that Mr Church is the only man for her - "You can stop rubbing that test tube now Pat..." - even if her love for him remains unrequited.