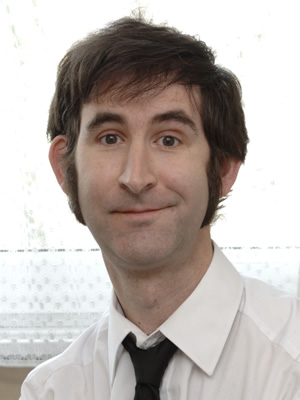 Ben Moor, the creator of Undone, who also plays Tankerton in the show, kindly allowed us to ask him some questions...

Hi Ben. Thanks for talking to us. You've been doing comedy for ages now. How did it all start?

I had been a member of the Oxford Revue at university and had a couple of Edinburgh Fringes under my belt and, on leaving, I decided that writing and acting comedy was the thing for me. I moved to London and started submitting sketches to Week Ending (early 1991) and doing a bit of the stand-up circuit, but that wasn't really for me. My jokes didn't tend to be belly laughers but more wry smilers and so it was a question of finding a format and medium that worked best. My "stand-up theatre" (it's an ongoing struggle to define my live pieces, but that's as good as I've heard) shows began in 1993 and I've since developed a style of comedy/drama/storytelling which also works well on the radio. And maybe not so well on TV.

Cool stuff. So, we're now up to Series 3 of Undone, your Radio 7 comedy series. For those that haven't heard the show before, can you summarise what it's about?

A young woman called Edna Turner arrives in London to work on an entertainment listings magazine but soon learns things are weird in the big city. She meets the mysterious Tankerton Slopes who introduces her to the parallel city of Undone which is the origin of the weirdness. He recruits her to keep the cities separate and distinct but slowly she learns things are not as simple as she was led to believe. I think that's a fairly spoiler-free explanation.

It's quite a bizarre and surreal setup - where did the idea come from?

Well there are always so many wonderful things going on in London - people from all over the world come here to perform and share their culture and mix with ours. I thought it would be interesting to ask whether they do actually come from a different reality. London is made up of so many influences that a newcomer here might see it as a marketplace of the imagination - and that's the basic heart of the story. But some people in the marketplace may not be honest. I've always loved alternate history sci-fi novels and they are an influence. The comedy of surrealism is in there too - just that peculiar brand of British nonsense that goes all the way back.

Elastic Planet was a sort of narrated documentary of connections with the wonderful Oliver Postgate telling us a series of bizarre facts. And he had a voice that you would instantly believe which made the stories very odd indeed. Undone is more about the discovery of weirdness - through Edna's eyes. But could the series of Elastic Planet be entirely set in the Undone universe - you know, that's not a bad idea!

Series 2 of Undone finished with a cliff hanger ending which hinted that a close friend of Edna's would die, and another would help cause the destruction of Undone. What can we expect from the new series? 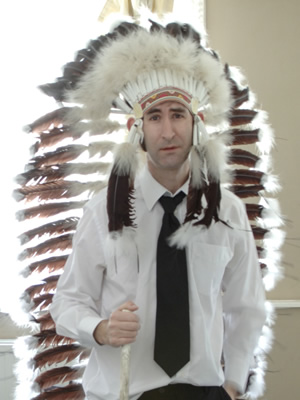 Well, those things - without giving anything away. Like most shows, we didn't know if we would be recommisioned and a year passed before we heard that Series 3 would go ahead. Already I knew I wanted to explore more of the parallel cities but also to extend Edna - really see how she would react to things. And she faces some tough decisions in this series. I just wish we could have had a bit more time - 35 minute runtimes, or maybe one more episode. There's a lot crammed into Series 3 and I hope it pays off. But in answer to your question - there's one major new character, the return of some old ones and a lot of weirdness.

The city of Undone is home some strange and wonderful things, including the University Goth Hospital, and an artist who literally draws veils over things. Do you have any favourite creations?

There's so many throwaway ideas, lines and images I tend to forget them. In the third episode of this series Edna invents an evil corporation and I kind of like that one. And the Goth Hospital.

And what's it like making Undone? It must be a bit different from the other radio shows you've worked on, like Radio 4 sketch show Talking And Not Talking?

We do it on location, in and around a house in Primrose Hill that's also used by Ed Reardon's Week and recently Beauty of Britain. It's got lots of rooms with different ambiences and there's a big garden plus it's very close to the canal - useful for longer walking and talking scenes. Undone isn't laugh a minute like Talking And Not Talking, so it wouldn't really gain anything by recording in front of an audience, and it's full of lots of bitty moments that need directing by Colin Anderson, the show's awesome producer. It's almost like making a low budget film in the sense that we decide where we'll do a scene, do a couple of walk throughs, record and we're on to the next bit. We don't hang around!

You've got a wide and varied comedy career - obviously there's the radio shows, but also your one man shows, some newspaper columns, various TV roles (including some Lee & Herring shows), and all sorts of other projects too... do you have a favourite medium?

I love doing my solo theatre pieces - they give me an instant reward (or derision for some of those awful puns) from the live audience and, over the years, I've been lucky enough to do them all over the country. But commercially it's important to have lots of projects at various stages, both in terms of acting and writing. I've done my fair share of TV ads, written for digital channels. And I love doing panel games like The 99p Challenge and Quote Unquote. There's obviously plenty of downtime, but being available means that when an opportunity like Casanova comes along and I get to spend 3 months shooting a Disney movie in Venice, I kind of know I have the best job in the world. Sorry.

Fair play to you! As you say, you love doing one man shows... so, any more on the horizon?

Hopefully next year. In the 1990s I did one pretty much every year, but now I don't feel the pressure. It's not because the ideas have dried up, it's more because the intention behind creating a new show (and the expense involved) has changed. I'd be looking to do one for its own sake, not because I feel I have to be on the radar all the time now. But maybe it's time. The idea I have is very strange, but funny and sad too.

Sounds great. Hopefully see you next year in Edinburgh then! You were once in a double-act with Al Murray. Is it weird seeing him sell out arenas now?

No gosh. Al is the best comedian in the country at his technique of audience interaction, and the way he progresses those incoherent thoughts to their ridiculous, but logical, conclusions is just amazing. I am a fan and we are still good friends. (And maybe he might be making his own trip to Undone soon...) 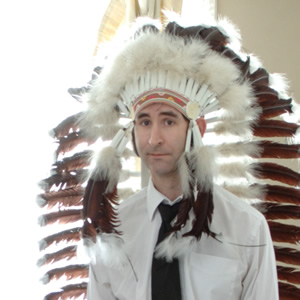 Here's something we've been wanting to ask you for ages: what was it like appearing as a topless 'calendar geek' in The IT Crowd?

It is a career highlight. Lots of projects seem to involve semi-nudity these days and, for some reason, I keep getting cast in them! I was an Urban Man in Fist of Fun, I've done cold cures for Austria topless, and in Richard Herring's Ra-Ra Rasputin I was a Tsar who had no clothes. I'm a big fan of The IT Crowd - me and Kevin Cecil had recorded a scene that was cut from another episode of the series, so when Graham Linehan invited me back, I was delighted. Plus, I looked pretty hot, you know! I still have a copy of the calendar too if you're interested... No? Nobody ever is!

Ha ha. Moving swiftly on... having now adapted some of your one-man shows as a book (More Trees to Climb), have you considered adapting Undone as a book as well, like Douglas Adams did with The Hitchhiker's Guide to the Galaxy?

Well, there are a couple of references to Undone in More Trees to Climb - lines and images that pop up there, to suggest they are all part of Moorland. The trouble about an Undone book is that, just after Series 1 started going out, China Miéville published Un Lun Dun. I haven't read it (in case we had too much in common) but he is an awesome writer. Saying that, if a publisher wants to get in touch...

One final question if we may - what are your favourite comedy people and shows?...

Actually, just one more question if we may... have you ever tried to make troubled eggs?

No. They are too troubling.