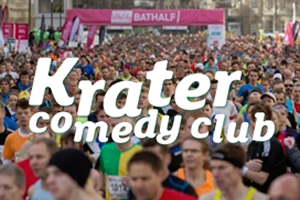 Stand-ups to enter Bath marathon the morning after a show

The comedians starring in a live show at the Krater Comedy Club in Bath on Saturday 11th March will then take part in the city's half marathon the next day.

Rob Deering explains how an uncontrollable urge to show off lead him into a career that mixes music and comedy.

A number of comedians have run the London Marathon today. Helen Duff was fastest with 3:47:25.

Kiri Pritchard-McLean has been announced as the new host of Newsjack, Radio 4 Extra's topical comedy show that has an open door submission policy.

Jason Manford compered a strong line-up of comedy and music at the Royal Albert Hall in aid of Parkinson's.

The bill features a line up of some instantly recognisable names so far, with more expected to be revealed shortly.

It's perhaps fitting that on the opening night of the Glasgow Comedy Festival, Rob Deering should start and end his show, Musicface, with recreations of actual festival scenes.