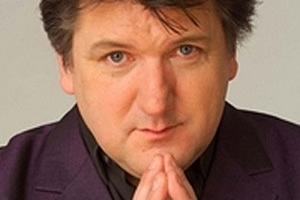 We look at the work of Bob Mills on talkSport.

Best known for his cult ITV show In Bed with Medinner, Bob Mills also worked with the likes of Ray Winstone, Timothy Spall and Michael Barrymore during a busy spell on both sides of the camera. Not all of it went as planned.

Have I Got News For You feature:

It might seem odd to re-evaluate an episode of Have I Got News For You from November 1995 but the reason I've chosen it is because it's the one time I was in the audience for the show. A young, innocent, unsexy twenty one year old at the time, I absolutely loved the experience, partially because a fair amount of material was edited out of the aired version for legal reasons but also because it was a real thrill to see Paul Merton and Angus Deayton perform in the flesh.

Launched for the general election, it's a shame this sharp slice of satire isn't sticking around for a bit longer.

Podcasts of the Week: Strong and Stable

It's never wise to announce that the new presenter of a programme is "comedian so-and-so". You're more likely to decide for yourself when someone is funny rather than take somebody else's word for it. Being told somebody is a stand-up usually makes you determined not to find them funny. Nonetheless, in line with the Corporation's present policy of ensuring that most radio shows are fronted by either television actors or comedians, the new presenter of Fighting Talk is Josh Widdicombe, who'll share his position with former Sky Sports anchor Georgie Thompson.

There's nothing on British radio quite as divisive as this comedy chat format, which solicits opinions on the sporting stories of the week, handing out "points for punditry". In a good week, they'll have guests such as Bob Mills, Martin Kelner and Eleanor Oldroyd, people who know how to tiptoe up to the precipice of scandal and then retreat before they end up in trouble. This has resulted in some fairly hair-raising moments in the past, even when the presenters were experienced self-op radio hands such as Colin Murray or Johnny Vaughan. There's a world of difference between a presenter who can be funny and a funny person who can present. It should be interesting to see how Widdicombe handles the job.

The stand-up legend has been in the game for 30 years. 'It's been a long time, hasn't it?' he recalls. 'Many people say too long.'

"Nothing compares with stand-up. You go on stage and it's just you and however many people in the room. There's no middle ground."

Video of a man having his hand being bitten by a big fish. Phone footage of a condom being blown up really big. A squirrel being filmed as it jumps out of a tall window. 'Wacky' viral clips such as these are the backbone of this new outing from Comedy Central. Having done stints Mocking the Week, Enlivening the Apollo and spreading Russell Howard's Good News, stand-up merchant Seann Walsh introduces you to his world in this, the first of a new 13-part series.

There's just one snag - his world looks alarmingly like You've Been Framed. Sure, the subject matter is a little more risqué than the cutesy ITV staple, but the 'clip-gag-clip-gag' formula is inescapably post-Beadle. There's the odd sketch thrown in (oldies will recall Bob Mills doing broadly the same schtick on late-night ITV years ago) but they hardly dent the familiar rat-a-tat-tat rhythm of the show. As a post-pub banter buffet, it's a safe and reliable choice. Just don't expect garnish.