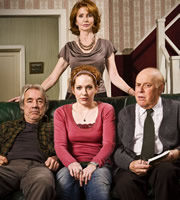 Cheryl Taylor has been named as the BBC's new Controller of Comedy Commissioning - one of the most powerful jobs in the comedy industry.

Taylor, based at BBC Manchester, will take up the role in the autumn. In her current role, she has been responsible for nurturing original comedy from the nations and regions - The Old Guys (pictured), Sunshine, Life Of Riley, The Cup, Cowards and the forthcoming BBC Three comedies Home Time, Lunch Monkeys and The Gemma Factor are amongst the shows she has worked on.

Between August 2006 and May 2007 Cheryl Taylor was Acting Comedy Controller at the BBC, covering Lucy Lumsden's maternity leave. During this time she re-commissioned Gavin And Stacey and commissioned Sunshine. However, not all her decisions were a hit - the failed Lab Rats was another show she commissioned during this period.

Prior to the BBC, she was Head of Comedy at Hat Trick Productions from where she co-created Drop Dead Gorgeous, and executive produced Worst Week Of My Life and Bromwell High. Taylor began her commissioning career with a flourish at Channel 4, where she was responsible for Spaced and Black Books, amongst others.

BBC Vision boss Jana Bennett says: "This is the premier job in comedy in the UK. Cheryl taps into the comedy community across the country and is widely respected throughout the industy and by both in-house and independent producers and controllers. Our audiences love great comedy and it's extremely important to all of our channels and online. I can't think of a better person to provide healthy doses of laughter than Cheryl."

Taylor says: "I'm completely thrilled to be asked to head up the BBC's extensive comedy operation - and in particular from my Manchester base. It's the most exciting and diverse comedy job in the country and I'm delighted that the genre will have such a significant role to play in the BBC's ongoing commitment to creative communities across the UK."