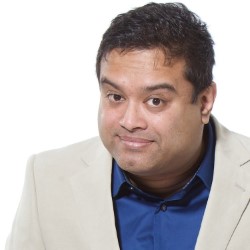 Born in the UK to a family of Bengali doctors, the early 1990s saw Paul qualifying as a doctor and taking his first steps on the stand-up comedy circuit. Juggling both careers, he was nominated for the Edinburgh Comedy Award at the 2006 Fringe. A lifetime of curiosity and learning not only informs Paul's comedy but also ranks him as one of the UK's finest quizzers. He's The Sinnerman on ITV's The Chase and also appears on BBC Radio 4's The News Quiz, Just a Minute and his own award-winning series, Paul Sinha's History Revision.