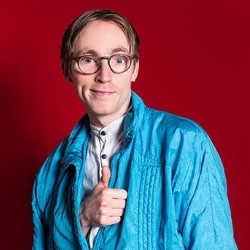 Award-winning comedian Rob Carter's cult-hit creation, Christopher Bliss, is back. The worst novelist in Shropshire has written, directed, and cast himself in his first ever play, alongside both of his friends. 'One of the best character shows we've seen for a long time' (Comedy.co.uk). 'This is how character comedy should be done' **** (Chortle.co.uk). 'Pant-wettingly funny' **** (Fest). As seen in Channel 4's Peep Show and Fresh Meat and BBC's Siblings. #ISWMLESBWWHYBSWMW

Ruddy hell this is a great show! Join Christopher Bliss, Shropshire's greatest novelist as he puts on his first play. Who will win best villager of the year, who'll win worst villager and have to leave the village for ever? Village life has never been so entertaining.