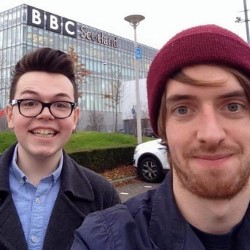 An hour of stand-up from the vanguard of Glaswegian comedy. Both nominated twice for Best Newcomer at the Scottish Comedy Awards, both two-time Scottish Comedian of the Year finalists. The two are also long-time affiliates of the cult alternative collective Chunks and founding members of Scram! at The Stand in Glasgow. Christopher: So You Think You're Funny? finalist. As featured on BBC Radio 1 and BBC Scotland. 'Following in the footsteps of Kevin Bridges and Daniel Sloss' (STV). Rosco: 'Shades of Tony Law-style buffoonery' (Chortle.co.uk). Sold-out solo show at the Glasgow International Comedy Festival.