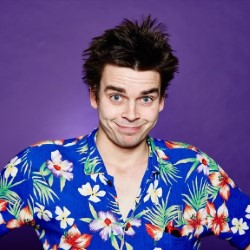 This award-winning idiot is back to talk about what he's been up to. Par for the course for most Edinburgh shows but this year he's encountered love and death, so what he's saying might have some emotional heft. Probably not, though. He's been inventing things this year, and at least one of them is genuinely brilliant. He met a werewolf too. 'An absolute idiot... Simple, silly and screamingly funny.' (Fest). 'A potentially massive future comedy star' (Herald). 'A born entertainer and a great comedy writer' (Chortle.co.uk). Member of award-nominated collectives Weirdos and Comedian's Cinema Club. www.pay-what-you-want.info