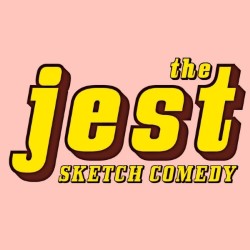 Comedy quintet and stars of BBC Radio 4's Sketchorama The Jest are back. A brand new, delightfully dark hour from a sketch group who BroadwayBaby.com described as caring 'more about being comical than seeming cool'. But hey, who's to say we can't be both, right guys? Guys? 'The next big thing in sketch comedy' ***** (Everything-Theatre.co.uk). 'Intelligent, inventive and deliciously absurd' **** (List). 'They've raised the bar for sketch comedy' **** (ThreeWeeks).

Comedy quintet and stars of BBC Radio 4's Sketchorama The Jest present a world of wayward characters and black humour in this late night show of delightfully dark sketches.

A road rage counsellor hides a horrific misdemeanor of her own, an amateur micro pig farmer's hobby is about to take a disturbing turn and something terrible has happened to Dame Maggie Smith. Do not be afeared - enter The Jest's world of oddities and warped humour in this brand new hour of fast-paced sketches and original characters.

The Jest is a comedy quintet who present dark observational sketches with a subversive twist, who this year were the only sketch act to reach the finals of the New Act of the Year Awards 2015. The Jest is made up of University of Exeter graduates; Ella Ainsworth (BBC's Hustle and Being Human), one of the original members of School of Comedy, a character-based comedy sketch show featuring a cast made up entirely of children, which performed at Pleasance Courtyard in Edinburgh before Channel 4 commissioned the show for two series; Jack Stanley, a "prominent child actor", debuting as a terrified nine-year old in Messiah, and maturing through roles in Little Britain, The Hitchhiker's Guide to the Galaxy, and unforgettably, Agent Cody Banks 2: Destination London; Tristan Rogers, who recently gained his MA in acting from East 15 Acting School; Luke Theobald, runner-up on an episode of BBC1's Pointless; and Bryony Twydle, whose dog Stanley writes the majority of The Jest's sketches.