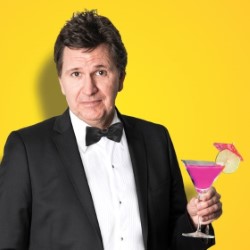 Stewart Francis, the star of Mock The Week, Michael McIntyre's Comedy Roadshow and Live At The Apollo returns to the Edinburgh Festival with his fantastic, hilarious new show Pun Gent!

Stewart has devoted this show to his father, who was a roofer. So dad - if you're up there? As for having kids himself he's decided he doesn't want any... anyone who wants some let him know and he'll drop them off. Oh he's just kidding of course, he has a beautiful daughter who he named after his mum, and in fact Passive Aggressive Psycho turns five tomorrow. On an unrelated matter, Stewart likes what mechanics wear... overall.

With Stewart Francis it's all about puns. And he's a gent. If time is money, Stewart's the man to do your shopping for he'll fill every minute with comedy bargains in the form of non-stop quick-fire gags, rarely giving you time to cease giggling until the next one starts. And it's not cheap produce either, previous goods winning awards such as Dave's Funniest Joke Of The Fringe Award 2012 and earning him a reputation as one of the finest comics around. Quite simply, the service Francis provides is good old-fashioned joke telling with a hook, punch-line and a dose of panache thrown in for good measure. So where's the catch? Well there probably is a pun-related answer, but only word wizards such as Stewart Francis could find one.

Having received international acclaim, in the US, UK and his native Canada, Stewart moved to the UK on a Tuesday in August, 2007 following successful appearances at the Edinburgh Fringe, sell-out nationwide tours and numerous TV appearances. Since then he has continued to sell out venues, appear on TV (besides Mock The Week, Michael McIntyre's Comedy Roadshow and Live At The Apollo he has been in 8 Out Of 10 Cats, Dave's One Night Stand and even Celebrity Mastermind) and supported Ricky Gervais on tour. He is also an actor and writer, credits including Not Going Out and The Omid Djalili Show. Along with Craig Campbell and Glenn Wool he is also a member of comedy trio The Lumberjacks, who have performed at the Edinburgh Fringe and throughout the UK.

Stewart is developing a sitcom script for television. It will star himself and chronicles observations he's made about living in the UK. The working title is The Olivia Colman Show.

In September 2015, Stewart will be climbing Everest, along with five other comedians and fifty comedy fans. He'll be part of the Stand Up On Everest trek, which will raise money for Save the Children and aim to set a new record by performing the world's highest stand-up gig.