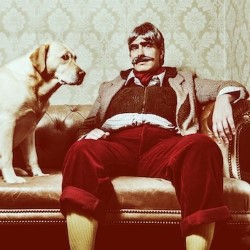 What do UKIP supporting Lord Ponsanby, retired model Sulky Waterboat and alcoholic do-gooder Vanessa the Undresser have in common? Nothing... except a postcode. Character comedian Sophie Pelham (BBC: Miranda, Reggie Perrin) returns to the festival after the 2014 hit, Marigold with a joyous satirical romp through rural village life in all its curtain twitching glory. 'Extremely funny' (Stage), 'Fantastical funny... forcing those who watch to laugh aloud even while squirming within' **** (BroadwayBaby.com). **** (Ham & High).

What do UKIP supporting Lord Ponsanby, retired model Sulky Waterboat and alcoholic do-gooder Vanessa "The Undresser" have in common? Nothing... except a postcode. Welcome to Kilmington, Wiltshire: a place where nothing changes YET everything is changing... the village school is now an Infant centre, they sell Hummus in the shop and there's even a herd of Yaks. Whatever next?

Acutely observed character comedy from the ever insightful Sophie Pelham: squirm and chuckle as Pelham turns her magnifying glass and comedic eye to the countryside, peeling back the twitching curtain of dark rural, village life and exploring the pathos and absurdity of the characters found behind.

Picture The Archers... on steroids... directed by the League Of Gentlemen. Larger than life characters, both realistic to a tee AND absurd, played out with an impeccable attention to the downright bizarre details!

Sophie Pelham returns to the festival after 2014 hit, Marigold, with another joyous satirical romp through village life and rural oddities - a wacky world of wonderful weirdos that will never fail to fascinate and amuse her.

This year Pelham has been gigging regularly on the London circuit alongside comics such as The Grandees and Joe Lycett. Sophie is LAMDA trained and also studied clowning with world-renowned teacher Phillip Gaulier. She was in the original cast of Season 2 of Miranda and also in the Christmas day special, in a part written especially for her by Miranda herself. She also played the lead opposite Darren Boyd in award winning short film, Asylum Seekers. Other TV credits include: Reggie Perrin (BBC1), Kerry and Lou (BBC pilot).