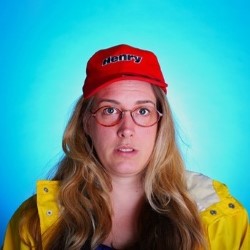 Marigold has an IQ of 212, a social-awareness of zero, and one big mission to meet her idol, Angela Merkel! But can she find her way out of the small Wiltshire village she grew up in? An eccentric and poignant new comedy from Sophie Pelham (Miranda BBC, Reggie Perrin BBC). Sophie was last at the festival with her critically acclaimed one-woman show Call Me If You Feel Too Happy. 'Hilarious' **** (BroadwayBaby.com). 'Extremely funny' (Stage). 'One of the funniest shows of the year' **** (Ham & High). 'A fantastic one-woman show. Sophie Pelham gives a brilliant performance' **** (UKTheatre.net).