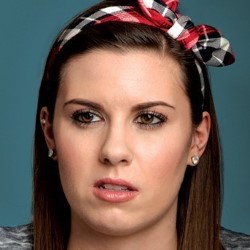 Sarah Callaghan feels trapped. In her highly anticipated debut hour, this refreshingly honest rising star discusses small worlds and trying to break free. Expect sharp observations from this raw, gutsy new talent. 'No-nonsense rising star' (Time Out - Class of 2014). Up the Creek One to Watch winner and Leicester Square New Act of the Year finalist 2013. As seen on Virtually Famous (E4). 'Magnificent performance ... an absolute natural, Callaghan is definitely one to catch' (Fest). 'Sarah Callaghan is the real deal, and brings an unaffected authenticity to her set' (Chortle.co.uk). 'Clever and politically savvy' (BroadwayBaby.com).

Beautifully honest and infectiously upfront - 23 year-old Sarah Callaghan is a unique performer and rising star, having been chosen to be one of Time Out's Class of 2014. Now in 2015 Sarah makes her Edinburgh debut with her hour-long show entitled Elephant at the Pleasance Courtyard this August. She started performing in 2010 and quickly made her mark becoming a Funny Women finalist the following year. Her reputation for delivering observational humour that doesn't pull any punches. In her highly anticipated debut hour, this refreshingly honest rising star discusses small worlds and trying to break free.

Sarah still lives at home with her Mum. Some people look at her and immediately judge. Surely this girl doesn't know anything about life or the world? But that's not true - she looks out of the window, occasionally. She finds it hard to be positive. People tell her she needs to be a glass half full sort of person, but she only sees the glass as a weapon. It's hard to be positive when you're ambitious. The stage is her bedroom. She's spent years staring out of it, often imagining flying away. Mainly because she's on the Heathrow flight path!

Her childhood wasn't a bed of roses. Drugs were rife on the council estate where she lives. Her peers never act upon their dreams because life is just consuming them. Young teenage girls get pregnant and just accept the bare minimum and she's scared to turn out like that. She is trapped at home with no money and no hope of ever getting away. Perhaps stand-up could offer some escape? She quickly discovered that she was different to the people she grew up with. She has seen many people confine themselves to four walls physically and metaphorically - living in small places imaging bigger things. Why can't she dream big and fight to achieve it?

The elephant in the room is directed at the older generation (that means 30+). They had it easy. Everything was better and cheaper in the past. Young people like her can't even get on the property ladder now or make a decent living. Her generation gets called lazy for still living at home but it's not their fault. Sarah fist pumps an OAP because they understand - they remember the struggle ... and the war ... and spam.

Her TV credits include the forthcoming Virtually Famous which airs Monday 4th May at 10pm on E4 and then again on Friday 8th of May on Channel 4 and radio includes a pilot for Fubar with Barry From Watford. Expect sharp observations from this raw, gutsy new talent.