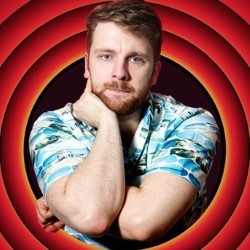 At last! The combination of early medieval Norse history and observational comedy the masses have been praying for. Anxiety has informed this year's offering - sufferers are particularly welcome to attend. Let's all laugh at it for heaven's sake. This show will feature an appearance from Chinese Christ. You might recognise Pierre from BBC Three, 4OD or if you had a child in South Africa between 1992-1998. (This is explained in the show.) 'The dawn of a major talent' (Guardian). 'One to watch' (Time Out).

At last! The combination of early medieval Norse history and observational comedy the masses have been praying for. Fresh from his debut last year, award winning comedian Pierre Novellie returns to Edinburgh Festival Fringe with his brand new show Pierre Novellie is Anxious Peter at the Pleasance Courtyard from the 5th - 30th August. You may recognise Pierre from BBC3, or if you had a child in South Africa between 1992-1998.

Following on from one of last year's most exciting new shows Pierre Novellie is Mighty Peter, South African born comedian Pierre is back. His new show looks at how the stress of living in South Africa and constant threat of attack followed Pierre to the Isle of Man where the most dangerous possibility is the risk of stepping in a rather large puddle. He's also joined match.com so this may all be a ruse to make sure potential matches actually look like their profile photo.

Winner of the Amused Moose Laugh-Off 2013 Award, which has previously been won by Sarah Millican, Jack Whitehall and Rob Beckett. Whilst at Cambridge in 2012, Pierre also became a finalist in the Chortle Student Comedy Award competition. Pierre's debut Fringe show was nominated for a 2014 Chortle Award, as well as being nominated for The Skinny Awards: Best Debutant 2014.

He toured the United States with the Cambridge Footlights 2012 show Perfect Strangers after a sell-out month at the Edinburgh Fringe. Pierre has performed in various locations across the world, including being the first comedian to perform at the CERN LH Comedy night, home of the Large Hadron Collider. Pierre appeared on BBC3's Edinburgh Comedy Fest Live and 4OD's comedy series Taxi-Gags.