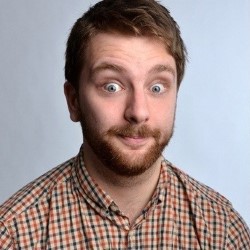 South African born Pierre Novellie was winner of Amused Moose Laugh Off 2013. His Edinburgh debut lifts the lid on mythical giants, medieval Welsh law and yoghurt. Chortle Award nominee 2014. 'One to watch' (Time Out). If you are a nerd you might recognise him from when he did CERN's first ever comedy evening next to the Large Hadron Collider or if you are cool and live in London you may have heard him on Reprezent Radio (The Voice of Young London). 'Sharp and smart... Hilariously memorable' (Steve Bennett, Chortle.co.uk).

The Award-Winning Pierre Novellie will be setting the Edinburgh Festival Fringe alight with his eagerly anticipated debut hour show Pierre Novellie is Mighty Peter at the Pleasance Courtyard from 30 July to 24 August.

Hailing from South Africa, Pierre Novellie landed on the UK shores back when he was still running around the schoolyard, where Pierre's interest with Anglo-Saxon, Norse and Celtic history grew. Catch his hilarious take on his not so new homeland and fascination with historic British civilizations whilst lifting the lid on mythical giants, Medieval Welsh Law and yoghurt.

Fresh out of Cambridge, where he was Vice President of the Cambridge Footlights, Pierre won Amused Moose Laugh-Off 2013 Award, which has previously been won by Sarah Millican, Jack Whitehall and Rob Beckett. Whilst at Cambridge in 2012, Pierre became a finalist in the Chortle Student Comedy Award competition. He toured the United States with the Cambridge Footlights 2012 show Perfect Strangers after a sell-out month at the Edinburgh Fringe. Pierre has performed in various locations across the world, including being the first comedian to perform at the CERN LH Comedy night, home of the Large Hadron Collider.