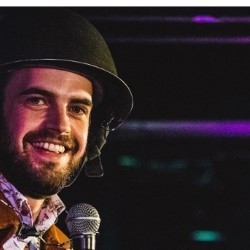 See such honest turns as Who's Blown an Egg? and Quite Busy by Pat Cahill. He'll rattle his helmet in your direction and see who takes a bite! All in for all! **** (Metro). 'This quirky performer has true star quality and bags of originality, mixing physical humour, gimmicks, wordplay and comedy songs' (Evening Standard). 'Stand-up with a difference ... reminiscent of the old great comics' ***** (BroadwayBaby.com). www.pay-what-you-want.info

The war has ended. No one has told Pat. Isolated in an underground bunker, Pat Cahill keeps busy with tales of the wilderness and reworkings of wartime tunes, in this gloriously imaginative hour of neo-music hall nonsense.

Pat Cahill returns to the Edinburgh Festival Fringe with Panjandrum a collection of stories and songs inspired by the ludicrously silly and the unpretentiously absurd. From his underground bunker, Pat talks about his life above ground, including how his quest to find solitude in London led him to a primitive existence on an out of service tube train, as well as his first foray into comedy as a four-year-old novice entertainer. As the days pass, he delights the troops (audience) with inspired music hall performances and physical comedy. Pat Cahill's gloriously imaginative style has placed him among comedy's best-loved eccentrics, and after scooping up comedy awards aplenty, his return to the festival is not to be missed.

Pat Cahill is a multi award-winning comedian, actor and writer. In 2012 he won the Chortle Best Newcomer award and the New Act of the Year award (former Hackney Empire New Act of the Year award), and starred in Chris Moyles' Comedy Empire for BBC Three. He wrote and performed two podcasts for BBC Radio, Chick N Mix and Doggy Dilemma, and took The Tim and Pat Show to Edinburgh, alongside comedian Tim Shishodia. The following year he wrote and starred in Still Reeling, a two-part series of Comedy Blaps alongside Matt King (Peep Show's Super Hans) for Channel 4, and supported Nina Conti and Ardal O'Hanlon on their UK tours. He debuted his first solo hour Start in Edinburgh in 2013, and starred in Seann Walsh's Late Night Comedy Spectacular for BBC Three.