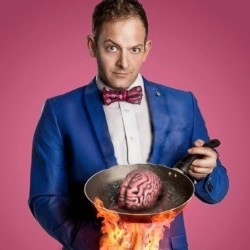 YouTube sensation Neil Henry is back after his sell out run last year with a brand new show full of mind-melting magic and brain-bending impossibilities. This is not 'pulling a rabbit from a hat' but more 'pulling a rabbit from himself'. 'Neil is a mix of Rowan Atkinson and my iron monger' (Stephen Fry). 'Neil Henry is a Star' (New York Times). 'Neil not only read my mind, he got me to read HIS' (Jeremy Paxman). 'Neil Henry defies all logic' (WhatsOnStage.com).

Magician Neil Henry works extensively as a close up magician and is constantly in demand around the world to perform his breath-taking magic and mentalism. He makes a return to the Edinburgh Fringe Festival this year following the sell out success last year to the Pleasance with his new show Neil Henry's Magical Mindsquirm, directed by Russell Labey (whatsonstage award nominated for Best New Comedy). His Youtube videos have over 1.7 million views.

Neil has performed for many celebrities including Benedict Cumberbatch, Hugh Laurie, Audley Harrison MBE and at many private parties for starts that include Colin Firth, Robert De Niro, Hugh Laurie, Ant and Dec, Harry Enfield and Ronnie Corbett. A member of the famous Magic Circle, has even performed for Her Majesty the Queen at The Royal Variety Show! Neil also co-owns the Magic Cave magic shop in the heart of London's Covent Garden.

His new show features a brand new version of the famous needle trick where he swallows an entire tin of alphabetti spaghetti, Yes, Neil will be pulling a rabbit out of HIMSELF. Neil searches for the most impossible things to do and then does them. Random objects simply named by the audience suddenly appear in their hands. Demonstrating X men style powers of temperature control, Decision influencing, and getting inside peoples minds in the most unusual way. Neil's unique style of magic is more than a magic show, it is a magical world where magic just seems to be all around and the impossible is the norm.

Television work includes At home with the Georgians (BBC) Fortysomething (CARLTON), 24 seven (GRANADA), Trial by Jury (BBC), No Sweat (BBC), Next of Kin (BBC), Holby City (BBC), According to Bex (BBC), Murder in Suburbia (CARLTON) and Doctor Who (BBC).