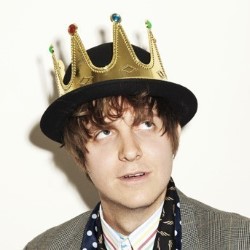 Alternative comedian, Joey, 30, one previous owner, with all of his own teeth and hair, has been on television (as seen on Nevermind the Buzzcocks, BBC Three Comedy Presents and Noel Fielding's Luxury Comedy) yet he still lives at his mum's house. Here he is moaning about it in a fun way, whilst simultaneously looking at how awful the modern world is and celebrating his 10th year as a stand-up comedian. 'Destined to become a leading name in British cult comedy' ***** (ThreeWeeks). 'Fans of the surreal and ridiculous will love this' (Chortle.co.uk).

It's Joey Page's 10 year anniversary as a stand-up comedian. He's managed to haul himself onto mainstream TV but tragically even that achievement has not prevented this thirty year-old failure from living at his mum's house. Come to his Catastrophe Party and celebrate the wake of Joey Page's career.

In his own words, Joey is "a stand-up comedian on the verge of quitting stand-up after 10 years of nearly making it".

("After ten years I think that I may possibly quit") Joey will be returning to the Edinburgh Fringe this year with his unique brand of surreal, and slightly downtrodden comedy.

His 2015 performances will be his 7th and possibly last at the festival, come and watch as Joey reflects on how being known for being on BBB3's comedy marathon, Never Mind the Buzzcocks and Noel Fielding's Luxury Comedy, just can't seem to help him break through into the mainstream or get him out of his childhood bedroom.