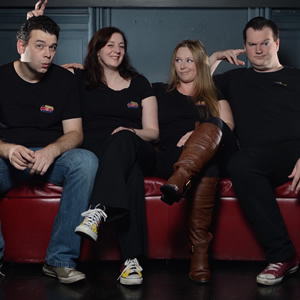 We have performed live comedy for over 8 years and make comedy films and sketches also, some of which have won awards. Between the members of the group we have clocked up appearances on Russell Howard's Good News, a Hovis Advert, a Kay Mellor drama and Crimewatch! We are happy to be where we are on the happy ladder but are happier to get happier and further up the happy ladder, or through the happy door.

Improvisation comedy show which is fast frantic and full of comedy characters created before your eyes! All we need are the suggestions! Matron!

Because we as a group are idiots. Hungry idiots, with laughter on the menu and burgers.

We have a special old lady who will stop at nothing to get our audience in, she's like a crowd Ninja, wearing stockings and a head scarf.

We'll hopefully make enough to eat on a daily basis, on good days we'll be able to drink too! 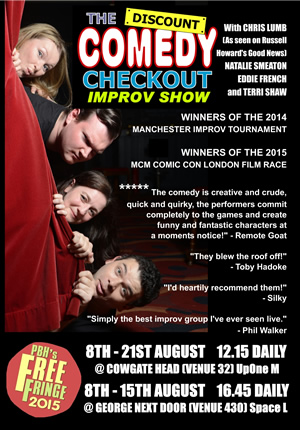 We had an emergency as one of our cast members wasn't feeling good so the only thing that could help her was Chow Mein! Two other cast members ran around Edinburgh looking for the dish to save her life! She survived without it. Diva!

Everyone in the group loves Hi-De-Hi! and we want to see Jeffrey Holland in his one man play about Stan Laurel. We also want to catch Gein's family Gift Shop Vol 2, Peter Brush, Joby Mageean, and loads more - too many to list really!

Jean - she was a singer in a karaoke bar last year who carried a large handbag with her which we assume had her dead husband's skull in (he didn't believe she had talent). She hogged the microphone and no one else got to sing. Bitch!

Because it's something different to the other shows because we are in it and not in any others, so come and see it and we'll give you a free pen or something. Seriously though we think you'll really enjoy it and laugh your face off.