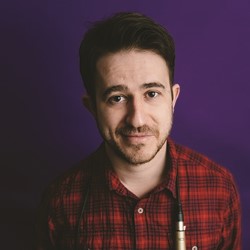 An hour of uncompromisingly hilarious stand-up from 'one of the best upcoming Scottish Comedians' (List). 'Part-philosopher, part-observer, part-surrealist with an incredulous eye for the ridiculous' (Scotsman). 'Wonderful!' (Susan Calman). 'He hits the nail on the head!' (Herald). Glasgow-based Davey works as a stand-up and sketch artist. Very much in demand, Davey has recently provided tour support for Daniel Sloss and Russell Kane (in Scotland) and Jenny Eclair (UK). Signed to Universal for a DVD development deal, Davey is most definitely one to watch!