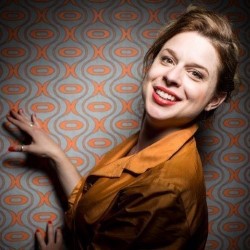 They say you should write about what you know, rising comedy star Amy Howerska has taken this advice quite literally. It just so happens she was raised by a pack of wild skydivers... in Swansea.

With a family consisting of trained killers and extreme sports idiots; performing comedy is not 'brave' compared to going home for Christmas. In the Howerska household it's not a party until everyone discusses their head injuries.

It's tough being the spoilsport in the safety harness; telling your parents to keep it down so you can revise. Everyone's family is a little weird, but what happens when hen parties are potholing expeditions? And family holidays are string of international near death experiences.

Apparently it's all 'character building'. Amy now has a little too much character.

Amy has been a huge disappointment to her skydiving parents, Instead of joining the family business of 'near death' she embarrassingly graduated from Oxford in 2009 and has since written for various TV shows on Channel 4, Channel 5 and worked as a promo writer for USA network on shows such as House, Burn Notice and Blue Collar. She is developing a huge buzz on the London comedy circuit and has been a finalist in more new act competitions than you can shake a stick at. She has also performed in such far flung places as New York, Norway and ...Newport.