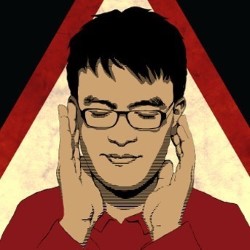 Following his 'astonishingly assured debut' **** (Sunday Times) in 2013, confident nerd and feminist creep Phil Wang returns with his wry outlook and laid-back style to talk about Chinese people, the ladies and Batman at one point. Phil continues to cement his reputation as 'an intelligent, attuned observer' (Scotsman), with his thoughts on love, race and yum-yums. As seen on Radio 4's Fresh From the Fringe and as heard on Radio 1's Comedy Live Lounge. 'Very promising up-and-comer' (Independent). 'Slick, distinctive, and funny' (Chortle.co.uk). 'Master of the intellectual dick joke' (Time Out).

Award-winning comic Phil Wang presents Mellow Yellow, the follow-up to his critically-acclaimed 2013 Edinburgh Festival Fringe debut. Join this confident nerd and feminist creep as he smashes Chinese stereotypes with an intelligent and genial hour on love, race, and yum yums.

Phil is mixed-race, with a British mother and Chinese-Malaysian father. He grew up in Malaysia, in a close-knit Chinese-Malaysian family, attending Chinese school as a child. His stand-up often explores his Chinese heritage, and the West's perceptions of Chinese people and culture, without veering into clichéd approaches to racial material.

Mellow Yellow is Phil's attempt at figuring out what genre of comedian he is, and what he actually wants from his career. Is he a race comic? A "cool" comic? A "geeky" comic? We'll see. Along the way to his inevitable conclusion, he considers youth, masculinity, "the ladies", and Batman, all in his trademark mellow tones.

Phil's wry outlook and laid-back style have seen him perform on The Rob Brydon Show (BBC Two), Three at the Fringe (BBC Three) and on BBC Radio 4's Fresh From the Fringe and the Comedy Live Lounge (BBC Radio 1). In 2010, the engineering graduate and former President of the Cambridge Footlights won the Chortle Student Comedian of the Year Award and in 2011 Phil was given Comedy Central's Funniest Student Award.