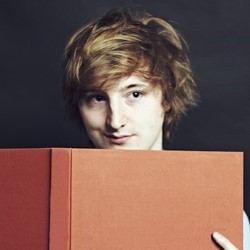 Believing that sugarcoating contemporary issues for kids only leads to more childhood diabetes, this debut hour from one of the brightest and most inventive new stars of the comedy scene sees Jonny exploring and rewriting the rule book for bedtime stories. 'Lennard's writing fizzes with interesting ideas and novel turns of phrase' (Chortle.co.uk).

Tale Blazer sees Jonny become the most unsuitable children's author, writing stories for kids growing up in the modern world. Believing that sugar coating contemporary issues for kids only leads to more childhood diabetes, Jonny rewrites the rulebook for bedtime stories this summer at the Assembly, George Square, from 30 July to 25 August.

His tales see him tackle the new wave of contemporary morals that should be impressed upon the 6 year olds of today's world, with fables that inappropriately explain euthanasia and modernizing traditional fairy tales such as Goldilocks and the Three Bears.

With experience as a director, writer, editor and performer of comedy across all mediums Jonny Lennard is a versatile and creative comedian keen to show audiences something they haven't seen before. Jonny reached the semi final of the Laughing Horse New Act of the Year 2012 as well as writing for and directing the Cambridge Footlights Tour Show 2012 - Perfect Strangers, which enjoyed a sell out Edinburgh run and multiple 5 star reviews. He has also written for Russell Howard's Good News (BBC 3).