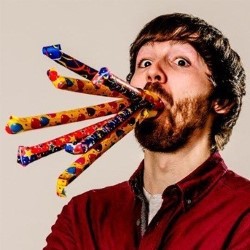 After a successful debut, award-winning comedian Ian Smith (BBC Two's Popatron, BBC Three's Sweat the Small Stuff) returns with his new show. It's about silliness and uncertainty ... or is it? (It is.) It'll be a lot of fun. Ian once had a line of dialogue in a BBC Two drama and was denied a spoon on a train - so the show has emotional depth too. 'Fantastically funny' (Times). 'Delightfully offbeat writing, a talent for sure' (Chortle.co.uk). 'The hour goes by in a whirlwind of hysterical laughter' **** (BroadwayBaby.com). ***** (ThreeWeeks). **** (Metro). **** (One4Review.co.uk). **** (TheNewCurrent.co.uk).

After a hugely successful debut, award-winning comedian Ian Smith returns to the Edinburgh Festival Fringe, with his brand new show - Flappable, at the Pleasance Courtyard at 6pm from 30 July to 25 August.

Join Ian for a hilarious hour of stories, silliness and shambling attempts at theatre. The show is about uncertainty... or is it? (It is) Uncertainty can be stressful; from housemates moving out to wandering how genuine an autograph request could be if you only had one line of dialogue. Ian was once denied a spoon on a train - so the show has emotional depth too. Ian will also attempt philosophising and will wear different trousers to last year.

At only 25, Ian has developed a reputation as one of the most exciting young acts on the circuit, with his conversational, energetic style and talent for improvisation.

His 2011 and 2012 Fringe shows, with Rob Beckett and Tom Toal respectively, received critical acclaim and were regularly voted amongst the top free shows of the festival. In 2013, Ian performed his debut solo hour Anything to sell-out audiences and a plethora of 4 and 5 star reviews. He has performed stand-up on BBC Three at the Fringe and last year appeared on BBC Three panel show Sweat the Small Stuff.

Alongside his burgeoning stand-up career, Ian has worked on various TV projects including a regular role in BBC2 series Popatron and Kay Mellor's BBC1 drama The Syndicate. In 2013 he starred alongside Katherine Parkinson in Sky pilot Officially Special and filmed a guest lead in Give Out Girls, a Big Talk series for Sky, and 2014 will see Ian in a BBC1 adaptation of Noah. Ian has also starred in semi-improvised indie films Benny and Jolene - which premiered at LOCO London Comedy Film Festival and will be in cinemas June 6th - and a leading role in A Wonderful Christmas Time, which will premiere in Winter 2014.