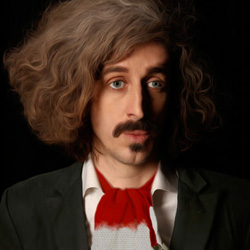 Sony Award Winner, Edinburgh Comedy Award Nominee, Chortle Award winner and Star of Radio 4 and BBC2, Tom returns with an exquisite new show. Expect elegant flourishes of language, twisted logic and whimsical storytelling courtesy of one of the finest and most original comics in town. You could also expect next week's lottery numbers, but let's deal with one thing at a time. Simply put, it's about Tom. 'The gods of comedy chose Tom Wrigglesworth for greatness' ***** (Scotsman). 'Magical Storytelling...a rare talent...hysterical and accomplished' ***** (Timeout). 'Funny bones' (Evening Standard).

Yorkshire man, Sony Award Winner, Edinburgh Comedy Award Nominee, Chortle Award winner and Star of BBC Radio 4 and BBC Two, Tom Wrigglesworth returns with an exquisite new show. Expect elegant flourishes of language, twisted logic and whimsical storytelling courtesy of one of the finest and most original comics in town. You could also expect next week's lottery numbers, but let's deal with one thing at a time. Simply put, it's about Tom.

Having spent ages making a TV programme about how big machines work, this show delves into Tom's composition. As a child, his granddad was constantly fixing things. Nothing was beyond repair, and when was nothing left to fix, he would set about maintaining and fixing the tools he used to fix things. Tom's granny knew this, and if his granddad was getting restless, she would intentionally break things to keep him occupied. Throughout Tom's childhood, his granddad would make tape recordings of them interviewing each other. In their final conversation before he died, Tom's granddad relayed a nightmare he'd had, in which Tom seemed 'utterly at odds with the universe'. It didn't make a great deal of sense back then, but now seems perfectly apt considering the scrapes Tom frequently finds himself entangled in.

Recently embroiled in a petty issue over repairing a camera under warranty, Tom found himself reflecting on today's throw-away society. No one seems to fix anything anymore; it's all just replaced or put into land fill. Searching high and low for a receipt for his bloody camera, Tom found the box of tapes his granddad had made. He has only just plucked up the courage to listen to them...

On TV, Tom recently co-presented BBC Two's Engineering Giants, exploring the inner workings and hidden secrets of the world's most enormous machines including a jumbo-jet, north sea ferry and a gas-rig. He was also one of the presenters on BBC Two series Electric Dreams; a show which enabled him to indulge his inner geek, exploring how the technological revolution of the 70's, 80's and 90's has transformed Britain's homes. In stand-up terms, Tom has performed on Edinburgh Comedy Fest Live, Russell Howard's Good News and The Comedy Gala for BBC Three as well as The World Stand's Up, two series of The Comedy Store and Edinburgh and Beyond - all for Comedy Central.

Award in recognition of excellence. Tom is now busy working on a brand new series for BBC Radio 4, Tom Wrigglesworth's Hang-ups which is scheduled for transmission this autumn.

Tom is also a regular host of BBC Radio 4's Comedy Club, and has also guested on BBC Radio 4's Loose Ends, News Quiz, The Unbelievable Truth, The Now Show, Act Your Age, It's Your Round, The Infinite Monkey Cage and You & Yours as well as BBC Radio 2's Out To Lunch and Claudia Winkleman's Arts Show. He has co-presented on Richard Bacon's BBC Radio 5 Live show and is a regular co-presenter on The Rhod Gilbert Show for BBC Radio Wales.