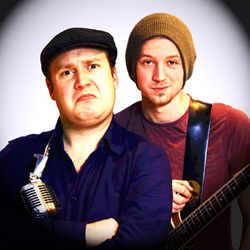 Following their acclaimed, smash-hit 2012 Edinburgh debut and a spectacular year that saw them named 'musical comedy's rising stars' by the Sunday Times, Jonny & the Baptists return to the Festival with a brand new show and a bucketload of ambition. A blisteringly funny, fiercely intelligent antidote to our stupid world, Jonny & the Baptists: Bigger Than Judas debuts at the Pleasance Dome from 31 July - 26 August 2013 at 9.40pm.

After bursting onto the comedy scene at the start of last year, Jonny & the Baptists have risen rapidly to national attention with appearances on Radio 4's The Now Show, The Infinite Monkey Cage and Sketchorama, Channel 5's The Gadget Show and BBC pick of Edinburgh Fresh From the Fringe (Radio 4/Red Button), as well as being 2013 New Act of the Year and Musical Comedy Award Finalists.

The band have also toured their unique blend of riotous rock'n'roll, satirical soul and anthemic absurdity across the UK, including debuts at the Latitude and Cornbury Festivals, Brighton Fringe and Leicester Comedy Festival. They have also been regular guests on Marcus Brigstocke's The Early Edition, and hosted their own monthly residency at the Leicester Square Theatre main house.

As if that wasn't enough, Jonny has also become an uncle. Now his new-found love for his baby niece has further steeled the band's determination to right the wrongs and call out the stupidities of the world she will grow up in. Targeting everything that is unfair, inexplicable and frankly intolerable in our increasingly conservative and ill-informed planet, Jonny & the Baptists: Bigger Than Judas is a must-see new show by one of the country's hottest emerging comedy acts.