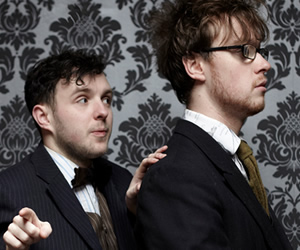 Double-act Ellis & Rose have won an award for masterminding an audacious but painful publicity stunt.

The duo have been awarded the Malcolm Hardee 'Pound Of Flesh' Award after Gareth Ellis allowed his comedy partner Rich Rose to inflict a black eye on him so they could claim they were attacked in the street as a result of the bad reviews they've been getting for one of the Fringe shows they are doing.

The duo claimed on the 14th August that Ellis was attacked by an irate member of the public, who was annoyed by their appearance in Jimmy Savile: The Punch & Judy Show. This is the show that has become infamous for managing to get three one star reviews.

The 'attack' was widely reported and the duo even gave interviews describing the event. However, it was revealed to the Malcolm Hardee award judges last night that the attack never happened but was in fact a planned publicity stunt. In their Edinburgh flat, Gareth Ellis repeatedly hit himself in the face with the blunt end of a milk whisk to try and give himself the black eye and, when this did not have the required effect, his comedy partner punched him four times in the face to obtain the desired effect.

The comedians claim they did this solely to get publicity and bigger audiences for their main show Ellis & Rose: Big in Denmark. Reportedly the trick has worked for them, as audience numbers rose by 50% following the stories of the attack.

To prove that Ellis' black eye was indeed real and self-inflicted they have released the following video. Following an explanation from the comedians, the video does indeed show Rose hitting Ellis very hard in the eye twice:

Ellis & Rose have been awarded the Malcolm Hardee 'Pound Of Flesh' Award as a special one-off. The award makes use of the Malcolm Hardee 'Act Most Likely To Make A Million Quid' trophy (which features the sterling pound symbol, hence the 'pound of flesh' name). The latter mentioned award is not being handed out this year as the judges have failed to find a comedian this year they think has the potential to go on to become a millionaire. 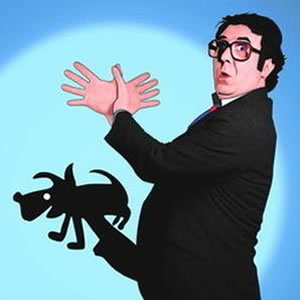 The Malcolm Hardee Awards, which started in the mid-2000s, are given in memory of "one of the most anarchic figures of his era", Malcolm Hardee, who drowned in 2005. The awards aim to recognise the comedians at the festival who are taking part in the 'true anarchic spirit of the Edinburgh Fringe'. The awards will run until 2017... because that's the number of trophies that have been made, and organiser John Fleming is not planning to order any more.

The shortlist for the main two Malcolm Hardee Awards are...

- Barry Ferns, for printing 2,000 fake Broadway Baby and Three Weeks review sheets which gave his show 6 stars, which he then distributed around the city.

- Richard Herring, for deciding that expensive Fringe posters are pointless and, instead, is giving members of his audience free DVDs of his past performances [Story].

- Lewis Schaffer, for hearing Herring's plan and then announcing he too was planning to give away Herring's DVDs at his own show.

- Gareth Morinan, for listing his show 11 times in the Fringe Programme because this gave him more space and was cheaper than buying a quarter page ad in the Programme [Story].

The winners will be announced on Friday at The Malcolm Hardee Awards Show.

To find out more about the awards visit www.malcolmhardee.co.uk