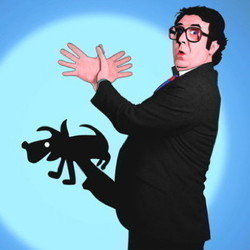 The awards celebrate the impact of the late 'godfather of British Alternative Comedy - Malcolm Hardee - who drowned in 2005.

Winners announced: around midnight on Friday 23rd August during the Awards Show

Past winners are listed on www.malcolmhardee.co.uk

This year's show will include the normal as-yet-unbooked star names, bizarre variety acts and the return of spaghetti juggling... plus the Scottish national Russian Egg Roulette Championships - instead of holding a gun to the head, two competitors face each other across a table and smash hard-boiled eggs on their foreheads BUT one of the eggs is raw not hard-boiled! The loser gets messy.

Also promised and usually delivered is gross offensiveness and nudity, with the Greatest Show On Legs again re-creating their Naked Balloon Dance.

The Awards Show is part of the Laughing Horse Free Festival, with the audience encouraged to donate money when they leave. A full 100% of all money collected (with no deductions of any kind) goes to the Mama Biashara charity run by The Scotsman's comedy critic Kate Copstick.

This year, the Just The Greatest comedy audio label is kindly donating a lump sum to cover the cost of designing, printing and distributing flyers and posters; paying for sound and lighting technicians; and engraving the trophies. A full 100% of any money left over will be donated to the Mama Biashara charity.

NB: Given the late Malcolm Hardee's rather dodgy reputation for handling money, it is worth emphasising... No personal costs are being covered. Only direct show and publicity costs. No transport; no accommodation costs. Nowt except flyers, posters, techies and engraving. And, for example, the double-sided flyers are only sponsored 50% (for the Malcolm Hardee side) - the other side is paid for out of organiser John Fleming's pocket). "Even from beyond the grave, Malcolm is losing me money..."