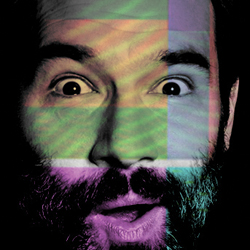 Cult buffoon, award-winning radio host and tech-lemming Adam Buxton looks within the soul of his laptop and considers how we present ourselves in the net age (he shows stuff he's made and reads out web comments). Just four nights. 'Adam Buxton would make a convincing claim to the title of funniest man in Britain' (ThreeWeeks). 'Buxton displays a near heroic willingness to behave as stupidly as possible in pursuit of laughs. A sunny riot of daft voices, songs, and tortuous puns' (Scotsman).

Following a sell-out monthly residency of his acclaimed music video showcase (BUG) at the BFI Southbank, Buxton presents his first solo Edinburgh Fringe show since 2005. Kernel Panic is a catalogue of Buxton's web travels, a demonstration of his whimsical tech wizardry, and an exploration of how we communicate ourselves in the digital ether.

Buxton has been at the forefront of British comedy for over 15 years. Star of Channel 4's The Adam & Joe Show (alongside Joe Cornish) throughout the '90s, Buxton created his own YouTube channel in 2006, and since then his uploads have amassed over 14 million views. He directed the video for Radiohead's 2007 single Jigsaw Falling into Place, and has a handful of TV & film appearances to his name (including roles in Hot Fuzz, Stardust, Son Of Rambow, The IT Crowd, Look Around You, Time Trumpet and a turn hosting Never Mind The Buzzcocks). His BBC 6 Music show with Joe Cornish won multiple accolades from 2009 to 2012, including 5 Sony Radio Awards.