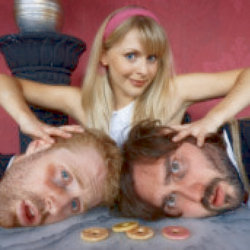 A man awakes in his own basement - bound, beaten and tormented by a masked figure armed with a finger puppet... So begins a violent whirlwind of Dutch salesmen, ageing Disney Princesses, environmentalist foxes and a sickeningly good little boy named Jimmy. Miranda Hennessy (E4's PhoneShop, C4's This Just In, BBC2's Dick and Dom's Funny Business) performs her debut sketch and character show with her 'friends', David Seymour (Law & Order, Love Bite) and Steven Shapland (Harry & Paul). Directed by Natalie Bailey (The Thick of It, Hotel Trubble). There will be blood.

The debut sketch show from Hennessy & Friends, starring Phoneshop's Miranda Hennessy alongside Law & Order UK's David Seymour and Harry & Paul's Steven Shapland, will be at the Underbelly throughout the Edinburgh Festival Fringe.

Our scene opens in deepest darkest Gloucestershire, where a man awakes in his own basement, bound, beaten and tormented by a masked figure armed with a finger puppet. So begins an entertaining, surreal and often violent whirlwind of Dutch salesmen, ageing Disney Princesses, tap-dancing environmentalist foxes, a pointless socialite called Victoria "with a V?", and a sickeningly good little boy named Jimmy... There will be blood.

Written by Miranda Hennessy and Directed by Natalie Bailey (BBC's The Thick of It and Hotel Trubble).

Co-star of the E1 Entertainment feature film Reykjavik Whale Watching Massacre, Miranda is a talented actress and comedy writer and along with performing with Hennessy & Friends she has had key theatre roles in productions with the Cambridge Shakespeare Company and Southwark Playhouse.

Other TV and film includes Law and Order UK ,Victoria Cross Heroes and he plays the lead in Brit flick Worms due for release later this year. He also plays Joan Collins's alter ego in the recent Snickers campaign.

Steven Shapland is a multi-skilled actor and musician. His roles range from the lead in horror/thriller Underwood, to a train driver in Bollywood action film Tezz. On the stage he has performed Shakespeare to Pantomime, and sketch comedy to the White Rabbit in a musical version of Alice in Wonderland. He has also worked on Harry & Paul and co-writes and performs a comedy panel show Take the Empire.