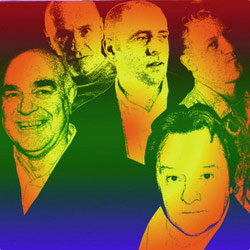 Steve Steen, Stephen Frost, Andy Smart, Ian Coppingger and Dave Johns are giants of comedy (well, not Ian). They have been touring their impro show over four continents for the last 30 years. The show will be created from your suggestions. They have performed on 'Whose Line Is It Anyway?' and regularly with the Comedy Store Players. They have appeared at over 100 Edinburgh Festivals between them. 'They are all pure geniuses' (South China Post). There will also be special guests. Check with the Gilded Balloon Box Office.