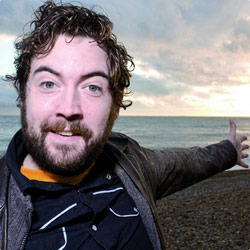 Comedian Nick Helm is putting his past and his problems firmly behind him in an attempt to help make you appreciate life in a whole new way, whether you want to or not. Featuring poetry, music, stand-up and chutzpah. 'Deadpan humour and fierce intelligence' **** (Scotsman). 'His songs are hilarious' **** (EdinburghGuide.com). 'Sheer silliness' **** (BroadwayBaby.com) 'Pathos so thick in the air it hurts' **** (BritishTheatreGuide.info). 'Clever, poignant, edgy and very funny' (Fest). 'It's the big kid losing all restraint that makes him incredibly endearing' (Chortle.co.uk).

Great Britain's Nick Helm is back on his feet and using them to kick your ass.

Equipped with a brand new show, the rising star returns to the Edinburgh Fringe with Nick Helm: Keep Hold of the Gold, combining one-liners, stories, poems and songs as he readies himself to continue his ascent in comedy as part of the Five Pound Fringe.

Yes, there will be jokes. Okay, there's going to be a little poetry. Fine, there'll even be some singing and dancing. But there's also going to be a lot of feelings. Red raw emotions hewn from the cliff faces of broken dreams and crushed hope as Nick Helm invites you to Keep Hold of the Gold in a dazzling display of bravura, chutzpah and positive thinking.

Having made his debut three years ago, Nick caught the attention of audiences and critics alike with his first Edinburgh Fringe show and by reaching the semi-final of So You Think You're Funny at the Edinburgh Fringe 2007, displaying 'unbridled enthusiasm' which is 'incredibly endearing' (Chortle) and receiving a four star reviews from the likes of British Theatre Guide and The Scotsman, the latter of whom wrote that he 'explores relationships with deadpan humour and fierce intelligence'.

After reaching the semi-final of the Laughing Horse New Act of the Year and Amused Moose New Act competitions, Nick went on to set up the My First Gig live comedy nights where acts detail their first-ever performance - a format that was transferred to radio and to Resonance 104.4 FM. He has also begun a venture into children's television after securing a role in CBBC's Big Babies, an innovative series based around 10-month old babies with the heads of grown men.

Nick has toured some of the finest comedy festivals in the UK including Leicester and Brighton, and Edinburgh Fringe audiences are next in line to feel the full force of his comedy onslaught.