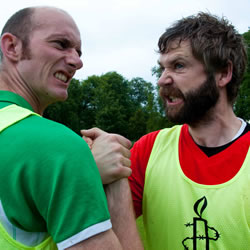 At the Meadowbank Stadium. Crowd welcome.

A 'comics vs critics' football match. See top names in comedy take on the reviewers - a grudge match indeed! Amnesty International will there to referee.

"Hair ruffling and bottom patting, there'll be a lot of that... and there'll be no training. I'll be encouraging my players to smoke and drink on the pitch." Comics captain, Rob Rouse

"The comedians begrudge us the honest public service we provide, by telling people not to see their shows. And we rage against them for being, err, funnier and more famous than we are. Talk about scores to settle? Now it's payback time." The Guardian's Brian Logan