Jim's efforts to appease the Kumranistan Foreign Secretary have failed. But then, Sir Humphrey has a plan. 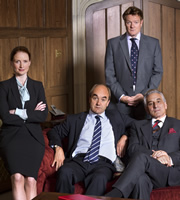 It's the last episode in the series and Jim's efforts to meet the Kumranistan Foreign Secretary's sexual requirements finally come to nothing.

It looks as if all is lost: no massive loan to Europe, failure of the European financial conference and the inevitable resignation of the Prime Minister. And it looks as though the BBC interview is going to be a disaster. Does Sir Humphrey has a solution? "Yes, Prime Minister..."