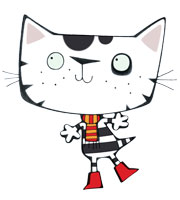 An accident-prone cat who is forever curious. He loves exploring and is not afraid to try out new things.
He knows he'll always learn something if he just has a go.

Quirk: Falling into, onto, over and out of things.
Catchphrase: Wosaat? 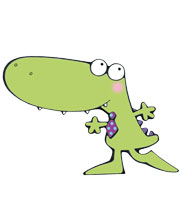 A cheeky crocodile with a squeaky lisp, he's Wussywat's naughty best friend. He loves discovering stuff with Wussywat and will always egg him on to do silly things. 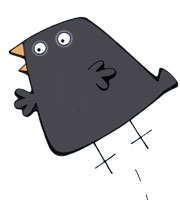 A bossy, babbling blackbird, she's like a big sister to Wussywat. Aerodynamically challenged and a bit of a performer, she thinks she knows best but usually doesn't. 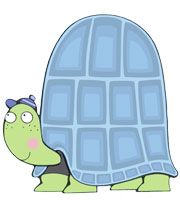 A bookish, tongue-tied tortoise, he's a bit forgetful. He knows many things about many things and loves telling Wussywat all about them, when he remembers.

Quirk: Pops in and out of his shell.
Catchphrase: "Ummm, er, erm, eh!" 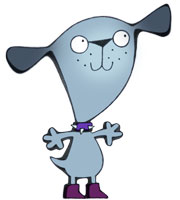 An overly excitable puppy, he cannot contain his excitement around Wussywat. He loves playing with his ball and is never short of a few licks with his extra long tongue. 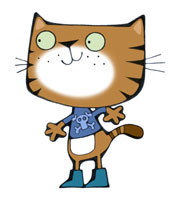 The cool cat next door, he's just too cool at everything. A little bit older than the rest of the gang, Wussywat is in absolute awe of him.

Quirk: He's good at pretty much everything.
Catchphrase: "Coolio!" 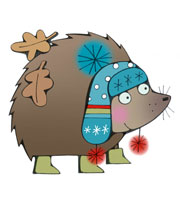 A snoozy, sleepy hedgehog, he can often be found napping in the oddest of places. When he's not asleep he'll be daydreaming or playing with Wussywat.

Quirk: Rolls up into a ball to move about.
Catchphrase: "Yaaaaawn!" 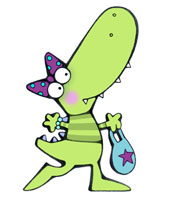 Duckadile's sporty big sister is a confident, happy-go-lucky crocodile who loves adventure. She'll try anything once and is always looking for the next big thing. 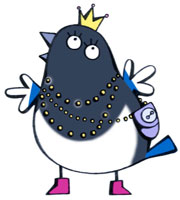 Ird's best friend is a magpie with an eye for jewellery and shiny things. She just can't help herself when they're about and will do anything to have them for keeps.