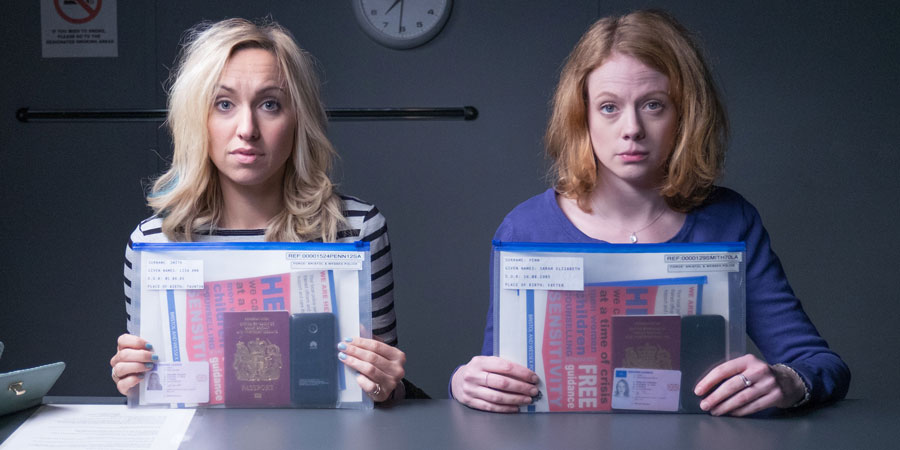 We sat down to chat with Kerry Howard and Zoe Boyle about their new sitcom Witless, in which they play mismatched flatmates Rhona and Leanne, on the run from a criminal gang and placed under police witness protection after having seen a gangland shooting.

This sounds like a great new format. Can you introduce it?

Kerry: I think the whole concept is like The Odd Couple on the run. Originally I did a sketch show pilot called Kerry for BBC Three and the BBC loved it but they wanted a series with more of a narrative. So they went back to the production company, Objective, and asked if they could develop a narrative from it.

So me and writers Joe Tucker and Lloyd Woolf got together and kind of bashed about an idea, coming up with Witless. We presented the idea to the BBC, we made a pilot and they loved it, so commissioned a series. It's got so many characters in it, it's like an action comedy with an ensemble - and they're rare, I don't think there are any shows about which are like our show.

Zoe: No, there aren't. Some similarities have been drawn to The Wrong Mans, and someone has described it as "The Wrong Mans meets Thelma And Louise", which we're thrilled with, we love that, but it's a bit more domestic. It's more at home, there are no international spies; so it's more low-key in that sense. But very funny!

Kerry, you mention your 2014 pilot - is Witless directly developed from a sketch in it?

No, we kind of went from a clean slate in the end. I haven't put the pilot to bed - I want to one day go back and have a series of a sketch show - so I'm biding my time, holding on to those characters.

The writers who wrote the 'Rude to Sandra' sketch, Joe and Lloyd, they're brilliant and created an amazing character for me. So we just had a chat, and they know what they can do and they kind of pushed me in a new direction. Their 'Rude to Sandra' was kind of like a tranny version of Laura [from Him & Her], which I love, but I didn't want to play that again right now. And she's brilliant in sketch, but I don't think you'd want to see 30 minutes of her! 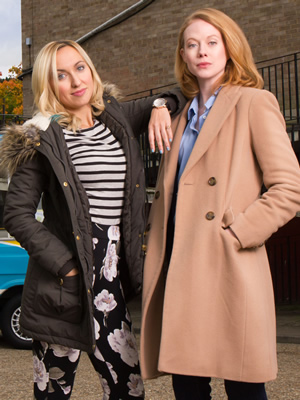 In the first episode we see Leanne and Rhona are completely mismatched flatmates, but have been living with each other for 2 years and 8 months already. How on Earth have they managed that?

Kerry: Ha ha, oh, we've got a lovely back-story for that!

Zoe: Yeah, at the start of the episode, Rhona is really at the end of her tether with Leanne. Rightly so, Leanne's a bit of a nightmare to be honest! But we have this idea that Rhona's been saving up for a flat - because she's a planner - so she's stuck there with Leanne for those 2 years and 8 months out of necessity, cheap rent.

What's good about how the show develops is that Rhona's livid about the situation she's found herself in with Leanne, but she comes to really rely on her and a proper friendship develops between the two of them, it's really lovely.

Kerry: It really is like those road movies; they are bound together through the situation. But through all the tension they realise they need each other. They need each other and without that person, they're ruined.

We see a hint of that in the first episode with a last-minute rescue of Rhona by Leanne - that continues throughout the series?

Zoe: Yeah. But the other way around too. Rhona has to step up on a couple of occasions and you see that Leanne does matter to her, because she puts herself on the line to protect Leanne. So it's a bit more of a two-way street, which is nice.

It looks like it must have been a lot of fun to film!

Kerry: It was! It was really ... it was just so lovely to get outside of a room and run about! I love doing that. It's proper physical comedy.

Zoe: The most physical stuff I've ever done, which was great! The team were so cool, and luckily Kerry and I get on! We just had such a laugh on set, the crew are amazing, so fun. The director's really talented and has amazing ideas.

Zoe: So good. Yeah. So it's just been an absolute joy from start to finish.

Did you do any research into real witness protection programmes before you started?

Kerry: Erm. That is a really good question. I didn't really look into it, because I always go into these things with the script and if the script hasn't gone into it I tend to think I don't need to do too much into it either. And it's such a quick turnaround: by the time you've got the script, you're like "oh my God, we've gotta shoot it!" We had a long rehearsal session with the director about the characters...

Zoe: Yeah. And I guess it's one of those things where you look at the script and you just think "Wow, how would I react to having to leave everything behind?" You're not even able to go back and get a toothbrush, you're literally just out, there's no contact with anybody. But it's such a short timescale too, the whole story is set over like 2 weeks. The characters don't really get the chance to dwell or miss home too much because it's so quick.

Zoe: I want quite a fun name too! There's a few ones in the offing. Maybe Imogen, maybe Suki... Maybe something like Pixie. But I think I want to be a pilot so I can travel around! I mean maybe that requires a skill... But I can just blag it a little bit!

That's a very good choice! Lots of opportunity, being a pilot.

Kerry: You have a lot of opportunity with pottery! [She laughs]

How do you think you would cope if you had to go into hiding?

Kerry: I'd have a breakdown probably, and just cry in a corner. It's terrifying! The idea of being removed from all of your family and friends, when you think about it, is terrifying.

Zoe: I would definitely stay at home. I don't think I'd have the guts to go anywhere. My Deliveroo bill would be through the roof! There'd be a lot of deliveries.

Kerry: I mean, there is someone out there trying to kill you...

Zoe: In a way it might be quite nice to just to sit at home with a box set! Even if you do get very fat...

Zoe, your career's been almost exclusively drama to date. Is comedy a genre that particularly appeals to you, that you'd like to work in more?

Yeah, definitely. I kind of only want to be working with Kerry! [They laugh] No, I am available for other work! Yeah - it was one of those things, I got the script and because I'd done mainly drama, you sort of need to know that you're entering into something where the writing is good because then the work you have to do is fairly minor. You just have to serve the writers. And because the scripts are so good, I thought 'yeah, I could definitely have a bash at this'. And I knew the team behind it are all so fantastic, so I thought this was definitely something I'd want to do.

And now I've got a taste of it, I'd love to do more comedy, for sure. 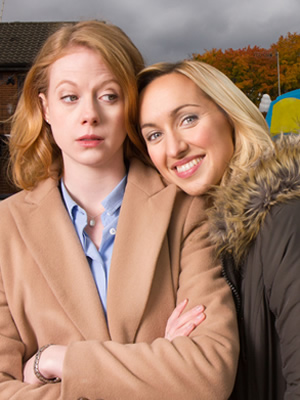 Does the traditional studio audience setting appeal or are you far more comfortable with the location, single camera shooting?

Zoe: Yeah, I am nicely comfortable with the single camera stuff! But I am at the stage now where I want to be branching out and doing things that do scare. This was something that I was quite nervous about because it was beyond anything I'd done before. So you know - studio stuff, absolutely.

Zoe: Yeah, I have been on the stage... I think it's one of those things, I'd never really 'got' the studio sitcom thing and then I went to see Up The Women being filmed - it's just really fun! You get the buzz of an audience and you get to be on camera. It's just great!

Kerry: And then you get this stuff too! Lovely little cast...

Kerry, we last saw you at Christmas in A Gert Lush Christmas with Russell - are you going to be working together again?

Kerry: Oh I'd love to work with Russ again! It was an amazing experience. I didn't realise how much fun I would have; I think I was more nervous about sort of proving myself. But actually he was so supportive and it was a really lovely experience. I'd leap at the chance again to do another show with him, be it Gert Lush or something else he's created.

Do you think there's a chance of the BBC giving the family another outing?

Kerry: I think everyone on the cast would just leap - we'd totally do it. We all had an amazing chemistry. But who knows? New controller of BBC Two now, so who knows...

How are you feeling about Witless being one of the first shows on the new online BBC Three? Nervous?

Kerry: I'm a little bit nervous in that I hope we find our audience, and our audience support the show and spread the word, tweet about it... It's going to get played on BBC One, which is great, finding another audience there, but I'm just so proud of it, I think it's an amazing show, so I just hope people find it and love it and then champion it as their own.

Zoe: It seems to me like it probably goes into a sort of word of mouth thing. I watch most of my stuff online and I hear about it through word of mouth, through what my friends are watching... As long as it gets that traction, I'm not worried about it being online because that's how I watch most stuff.

Kerry: And we believe in it! We believe in the product we created. Even if I wasn't in it, I would watch this show.

'Witless' is now available to watch via the BBC Three website. The episodes will be repeated on BBC One at 11:25pm from the 29th April.