It's Freddie and Stuart's anniversary party and they're expecting a long awaited guest. 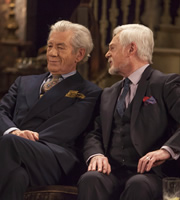 It's Freddie and Stuart's anniversary party and they're expecting a long awaited guest. When Ash accidentally lets slip news of the party to Stuart's mother, Stuart finally decides that he is going to tell her that he and Freddie are a couple.

The whole clan are round again to celebrate a typically awkward and eventful evening. Freddie is very excited about the arrival of a celebrity actor guest that he has invited, but Stuart is doubtful that she'll turn up.