Toast comes into conflict with the director of his latest stage role; a man said to have killed difficult actors in the past. He attempts to escape his worry by engaging the services of an escort.
Preview clips 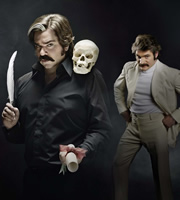 Toast's excitement at winning a part in a new play is tempered by two facts. One, his nemesis Ray Purchase is also in it. Two, there's a rumour his director, Acker Herron, has a history of murdering difficult actors.

Romantically, Toast has to choose between his old RADA contemporary, the fun-loving and beautiful Greta Cargo and a prostitute...

This episode is based on the pilot.