Chris Bran & Justin Chubb (aka The Jinsy Boys) venture back to the outskirts of the distant isle with their long-awaited album, Tvignest, which draws inspiration from the tune-well of ancient Jinsy folk-strumming and gullet-warbling. Recorded over a three cycle period using the latest both-ear technology, Tvignest takes us on an emotionally-draining canter through a dank moosical forest of twisty groves, dangly froots and leaf-drip.

Chris and Justin are best known for creating and starring in Sky Atlantic's critically-acclaimed cult comedy, This Is Jinsy. Set on a fictional island, inspired by the Channel Island of Guernsey, where the two friends grew up, the sitcom ran for two series and was nominated for a British Comedy Award and an international Rose d'Or for Best Sitcom, featuring many musical set pieces amid the narrative, as well as two stand-alone music specials.

Chris and Justin have been performing and playing in bands since their early teens. The Jinsy Boys continues their partnership into musical territories, drawing on many British folk and comedy influences, from The Albion Band to Neil Innes, The Trio Bulgarka to The Bonzo Dog Doo-Dah Band and Magnet's Wicker Man soundtrack. 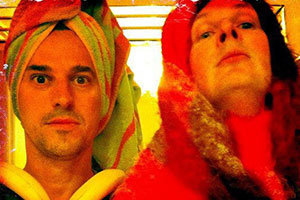 This Is Jinsy duo return with musical album

The creators and stars of This Is Jinsy have released a brand new album of music "from the tune-well of ancient Jinsy folk-strumming and gullet-warbling".

More This Is Jinsy products