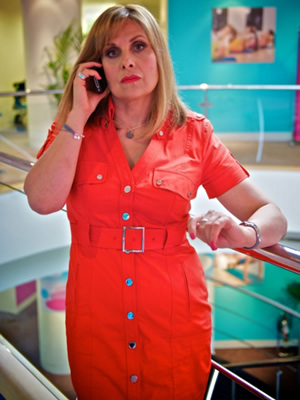 Rebecca Front is one of British Comedy Guide's favourite comic actors. Sky Living comedy The Spa sees her take centre stage as manager Alison Crabbe (pictured). Below, blogger Elliot Gonzalez talks to Rebecca about the show and her other forthcoming projects...

Hi Rebecca. Looking at Twitter after the first episode it seems The Spa is being well received by audiences...

Yeah, I saw little bits, and I think it was actually. I'm trying to keep off Twitter for a bit actually because I've got a lot of work to do. But I couldn't resist a glance!

The Spa looks like so much fun to film. Was it?

It really was actually. I mean it's always knackering when you're doing stuff like that but it makes such a difference if you're working with good people. And they are - there's nobody in that team that I didn't enjoy working with. It was such a pleasure, because every day you'd come in and go "Ooh goody so and so's in" so it was really, really lovely actually.

What attracted you to the role in the first place? Were you familiar with writer Derren Litten's work?

I was. I mean, obviously I'd seen a couple of episodes here and there of Benidorm so I kind of know his stuff. And part of the appeal was that he's very funny, he writes extremely wittily, but also in a very, very different style to anything I'd done before. And I'm usually drawn to quite small characters and quite dark comedy and I just thought this would be a real change, a real challenge. See if I could rise to it. I like to test myself out sometimes.

How does Alison differ from any of the many roles you've played before, like The Thick Of It's Nicola Murray for example?

In my head she's completely different. It's impossible for me obviously to see it differently, because I knew what I was trying to do with it. But I think as a character she's really different. Alison's got a real sour view of the world. And that's really kind of baffling and fun, and a lot of the characters I've played in many ways try particularly hard. Nicola tries very hard, Kath in Nighty Night is trying really hard to make everything alright...

And Alison... just doesn't give a shit! Ha ha. And that's quite fun actually. You know the first time I read that I thought "Ooh this is interesting. I've never really come across anybody quite like that before". And she quite openly doesn't either, it's quite refreshing.

She just doesn't care what anybody thinks of her. Of course she does actually, otherwise she wouldn't have lost all the weight [Remember she's Leighton Buzzard's slimmer of the decade]. Lot's of comic possibilities in her. 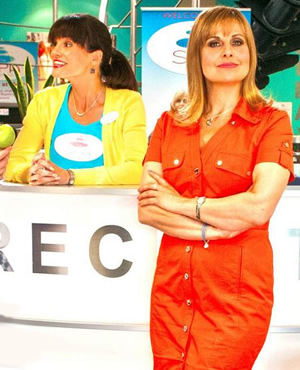 So a great character to play then?

Yeah, really good fun. The only sort of tricky bit I suppose is she's so sardonic that you can't play every line in that way. You have to give her a little bit of warmth sometimes, but then Derren is very good at putting that into the script as well.

So, I don't want to give too much away, but there are parts much later on where you really do start to see that she is quite vulnerable. Derren does that a lot in Benidorm, you think you know what they are and then he suddenly surprises you. I think fundamentally Derren's just a really nice man, and he sees the funny in people. But he also genuinely is thinking "what makes them like that?"

Can we talk a bit about receptionist Sally? How do you think Alison really feels about her? Does she like her, or is she a bit of a burden to her?

I think both of those, yeah. Sally's probably the only one that Alison does quite like, because you couldn't not like Sally, she's such a nice warm character. So equally yes, Alison does have to carry her, but then Alison feels that with everybody, "Oh go I've got to do everything myself!"... when actually she's not really doing anything at all. Ha ha. And, actually, the irony is that Sally is actually quite efficient in a weird way. She gets Alison out of scrapes and that sort of thing. Oddly, she's quite a good ally to have.

I just love Niky Wardley's performance in it because she makes her into a really fully rounded character. It's beautifully written anyway but she brings something else to it, to make you really care about her.

Do you have a favourite moment from the series?

Yes, actually one of my favourite moments from the whole series is from Episode 2 and Sally's at reception and Derren's character (Marcus) says to her "Who's looking after your little boy?" and she just runs off. Ha ha. Completely forgot she's got a child. It really made me laugh when I read it.

One of my favourite moments from the series is in Episode 2, when a lady at reception asks you the way to a cardio lesson and you ask Sally to help the lady find her cardigan...

Oh yeah! "She's lost her cardi". Filming it there were lots a little scenes like that where you know, it's all funny, but every now and then you're doing a scene and you suddenly think "Gosh! This is even funnier than I thought it was going to be." 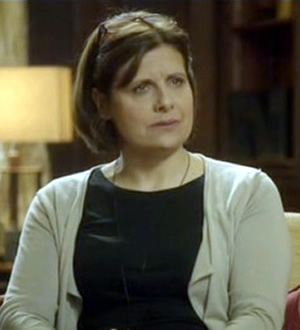 What's next for you then Rebecca? More comedy?

Yes. I've just signed up to something but, as ever, I probably can't say what it is.

I'm also starting a new BBC comedy in two weeks time and then I'm also doing a small-ish bit in The Wrong Mans with James Corden and Mathew Baynton, which is a really exciting series. I'm only in a couple of episodes but it's a real proper thriller and it's really funny as well.

Then I've got Psychobitches (pictured) coming up. I think it's coming out in May, or it may be a bit sooner than that. I think it's even better than the one-off, the range of characters and brilliance of the performers is really stunning. I mean it's great for me because I sort of just sit there in my cardigan doing the same character all the way through [Rebecca plays a psychiatrist and the series centres itself in her office and observes various characters coming and going], and it's just like sitting watching telly really. You just sit there and all these amazing people come and go. And Frances Barber is in that again, and she's extraordinary! She's a real comic talent.

Frances is in The Spa as well, what was it like working with her?

Hilarious. She really is one of those people who, you know, every day I'd go in and they'd say "Oh, Frances is in today" and I go, "Oh good." She's really good company and lovely to have around.

What's the relationship like between Alison and her character Ginny? Are they best friends?

Well, they sort of are. There's a very nice moment, again, I think it's in Episode 2 where Bolek [the cook played by Chris Geere] is trying to butter up Alison and says "Oh Ginny says you're like a sister to her and you her very best friend" and Alison's like "Oh, really?! Is that what she said?"

Because I think it's one of those friendships that's just sort of drifted off and they both quite like hanging out with each, but I don't think either one really knows that much about the other one's life or cares that much. It's like a really odd functional friendship. There's a moment where Alison tells Ginny she spent the night in the club and she says "What club?", to which she responds "The Health Club!" You kind of get the feeling Ginny doesn't really know anything about her really. 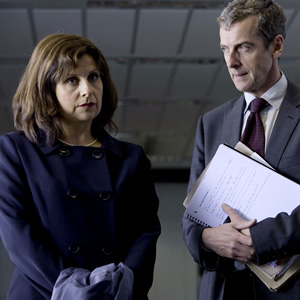 Now, I have to ask this - Will there be any more The Thick Of It?

Ha ha. Umm... I would love there to be but at the moment certainly there are absolutely no plans for it to. We've kind of drawn a line under it but Armando Iannucci has always said there might be the odd special here and there, but there's certainly nothing in the pipeline at the moment. And he's got so much on his plate at the moment that it's probably not going to happen for a while. If at all.

I saw on Twitter you're writing - what show is that for?

Me and my brother are about to start writing a new series of our radio show, Incredible Women, which is on Radio 4. I'm also writing a TV pilot, which again I can't really talk about, but it's something that I'm co-writing. My brother and I write together quite a lot, he's a fulltime writer. We've written the odd TV script but never got anything on.
It's funny actually, I often get messages on Twitter; people tweet me and say things like "I've got this idea, I wondered if you could get it to be lit" - and you think "I can't anything lit!". It's very, very hard [to get something commissioned] and people sort of think if you're on telly it will go on, but it's not like that at all. So we are now at least doing a pilot, which is good!

Thank you very much for your time Rebecca and all the best with your various projects.

The Spa is on Sky Living on Thursdays at 9pm.