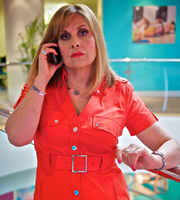 As the manager of the team, Alison is ambitious yet chaotic and tactless. She can't stand her staff or the customers - and if it weren't for those pesky people, she'd achieve her vision for The Spa much more expeditiously.

In reality, though, she's the barrier to the company's success - it's simply down to luck that most of her staff are either equally incompetent or too wrapped up in their own worlds to notice. Not surprisingly, Alison doesn't have friends and is notably single. 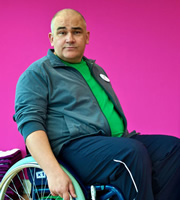 Although he's not quite as active as usual right now, Marcus is an experienced aerobics instructor. He bitterly uses a wheelchair after unsuccessfully running a spin class he wasn't qualified to hold.

Marcus's work at The Spa is dominated by his hunger for compensation and revenge. He and Alison are constantly at each other. 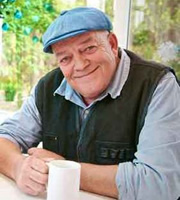 Meet The Spa's handyman. He's a loyal chap but annoys Alison with his forgetfulness and lack of social awareness.

More distressing for her, though (and the general public), is his insistence on wearing shorts all year round, revealing his 'package' of mega proportions. 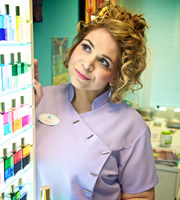 Relax to the calm, soothing voice of The Spa's complimentary therapy practitioner, whose history of depression has led her to explore a host of alternative, new-age treatments.

Davina tries to create an atmosphere of tranquillity and positivity around her - and fails. 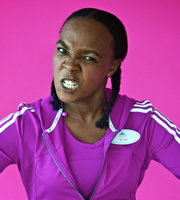 Don't mess with this one. Vron is a hyper-fit, hyper-aggressive weights instructor, who would fit right in with an army training corps.

She has little patience with customers or staff who are overweight. Her motto is: "It's fine to eat like a horse as long as you exercise like one." 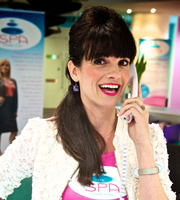 Bless Sally's heart. She's enthusiastic, well-meaning and eager to please. Her naive ability to take all requests at face value, missing the real point entirely, endears her to most men and drives Alison to distraction.

A fun-loving single mum, she's such a big Take That fan she called her son Markowen. All one word. 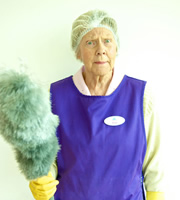 Poor Rose. She's the elderly cleaner with a melancholy gaze and shuffle.

The death of her best friend - her only friend - has left her particularly vulnerable and needy, which isn't helped by Alison's utter disinterest in anything Rose does or says. 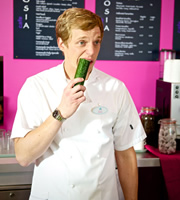 Bolek has recently come over to the UK from Poland and is chancing his way through life. He will happily fib his way into a job and charm his way into hooking up with the ladyfolk.

But how long will he hold down a job at The Spa as a chef when he can't cook? And will his flirting still rage on after going gooey-eyed over Sally? 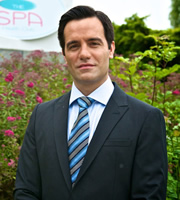 Costas is a snappy dresser and sharply witted, but he's also a lazy sausage.

Costas' family own a chain of gyms that includes The Spa so his wealth has been handed to him on a plate. Nevertheless, he strives for power and has got Alison's card marked. 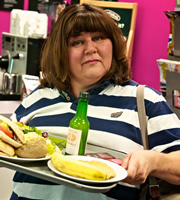 Bergita is a guest at The Spa.

The staff unwittingly insult her, so she's permanently disgruntled and complaining as a result. Still, it doesn't stop her from returning to The Spa for more!