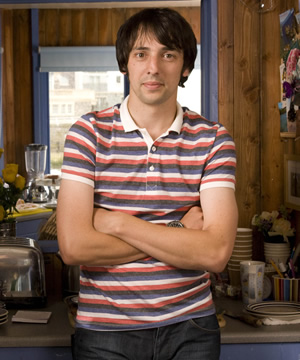 In this interview Ralf Little talks about the process of creating The Café, the gentle, warm-hearted sitcom he has co-written with Michelle Terry...

Hi Ralf. Perhaps we could start right at the beginning. How did you and Michelle meet?

Well, we did a play together as the Bush Theatre - I think this was 2008 - called 50 Ways To Leave Your Lover. We'd never met before but we just got on really well. We made each other laugh a lot and had a ball with this play.

I said to her, 'Do you know what, we should write something together. I've always wanted to write'... and she said, 'oh, do you know what, so do I'. I ought to stress that kind of conversation happens all the time. I've said it myself over the years, but you never do, and nothing comes of it...

However, in this case, we actually pulled our fingers out and did it. It all seems a bit surreal now. So we agreed that we should write together, and from then it was just a case of figuring out what kind of thing we wanted to write. We decided it was going to be a gentle paced six-part comedy with natural style and dialogue. So we then started meeting in coffee shops to come up with an idea...

Was there any particular reason you decided to go for the 'single camera' approach over, say, a studio sitcom with an audience?

I think it's because the kind of things we admire most are that style. Things like Human Remains - just brilliant dialogue. To be honest, when it gets right down to it, it's what we thought we'd be able to write best. A studio sitcom requires a certain style of writing I don't think we'd be able to do. I don't want to speak for Michelle, but I don't think either of us are good with gags.

So how did the writing process work for you?

Every step came about by almost trial and error. We'd develop a little bit, and then a little more, and then take two steps back if that wasn't quite working.

Really at the start our process, such as it was, was to catch up as friends, like you do after you finish your job, in a coffee shop or a pub or whatever... the only difference being we'd bring our laptops along. For the most part we'd be sitting around and making each other laugh, and telling each other stories and then, every now and again, one or the other of us might go, 'oh, hang on, that might work in the show... we have a character who does that'. So it was very trial and error in that respect, but then we got to the stage of getting together a pilot draft of an episode... 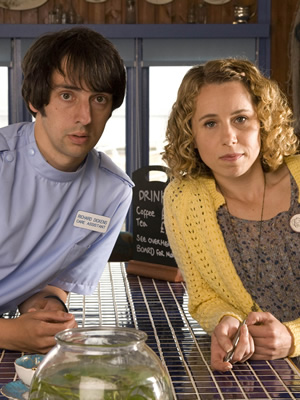 For the next stage, the advantage that we had over other first time writers is that I know people in the television industry already. I know people to show it to, get opinions from and whatever, so I showed it around to a couple of people. People were always very warm and supportive, but often it was sort of 'well, we think you're really onto something but we're not sure this is what this channel is interested in at the moment'.

Anyway, I gave Craig Cash a copy when we did the 2009 Royle Family special. That was in early November, and in late February the next year he rang me and said [at this point Ralf does a perfect impression of Craig's voice] 'Hallo Ralfy. I've just read it... after four months. To be honest I were a bit worried that it was going to be rubbish and I didn't know how to let you down gently. But, I were delighted, because I don't have to... because I really like it.' And I thought, 'Brilliant!'. Craig, who has no ego whatsoever, then said: 'I would really like to try and get this made with my production company and I'd love to direct it, if that's alright?' And I was like, 'Yeah!!! Of course! You're Craig Cash!"

So Craig came on board, suggested a couple of little tweaks to the script. Sky were apparently looking for something vaguely like this, so we took it to Sky. We did a table read - got a few actors in a room - and did the first episode. By this point they'd asked us for a second episode, as this was a few months later, so we got a first episode, and a second episode which, by the way, looking back now at the table read, was crap. This was in October 2010. After the table read, me and Michelle went to the pub around the corner to buy the actors a beer. Craig stayed and chatted to the people at Sky for five minutes and then came out and said 'well, they've commissioned six episodes'. It was amazing, the stuff of dreams really, and that's when the real work started...

So, yeah, it took us quite a while to get to that point, but bearing in mind since we first sat down with the initial idea, Michelle went off and did a couple of plays, and I did a TV series, so we weren't full time by any means. But in November 2010 we had to sit down full-time, and I kind of got my first office job! I'd never had an office job before, so it was really weird. Monday to Friday, getting up, travelling into the office... I tell you what, we needed an office, there's not a chance we'd have been able to do it on a more casual basis.

It seems like you spent quite a lot of time on the dialogue...

Once we'd actually figured out who the characters were, it was easier to work out their voices. But, we have done a bit of cheating. Some the things in the show are verbatim conversations we've heard on the tube or in a bar. The number of things I've heard people say, I've been hovering over their shoulder making a note to remind myself. Ha ha. There's a couple of things that Michelle's gran has said in the show, and both of our mums are in there with words that have gone straight into Carol's mouth.

We always knew we wanted to do a bit of that, but the trick was to find a workable framework on which to hang things, and that was where the hard work was - trying to make sure that we had a plot that was serviceable and wasn't just exposition.

The setting of the café seems absolutely pivotal - at what point of the process did you locate that? 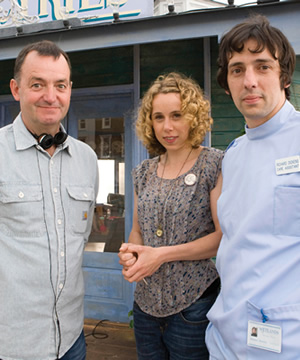 But, yes, we went down to Weston-Super-Mare to have a little look around. There were times where Daf and Craig were like 'can we not just use any old seaside town?'... but we were like, 'no, it absolutely had to be Weston.' So we saw a few places, but thought 'do you know where would be perfect?... this sort of area right here by the sea'... but it seemed really, really unlikely.

We had another meeting about two weeks later when we met the council and said to them, 'look, in our perfect world what we'd really like is to move that, and move this, take all those parking spaces, and build a temporary building here...'. The council went, 'yeah, alright then!'. So the crew set about designing a cafe and we sort of told them vaguely what we had in mind and they did a few drawings. We were extraordinarily privileged to be involved in every part of every decision - everything went through us. If we wanted things changed, they'd change them... we were consulted on everything, right down to the colour the cafe was painted. You don't normally get that kind of privilege as a first time writer but that's how Craig and Caroline make The Royle Family so I think Craig almost expected it. He was like, 'It's your show, what do you want?'

So do you regret opting to give the café panoramic windows? - That must have been a continuity nightmare, with the activity in the background making it hard to edit together different takes?

Ha ha. We always knew that was going to be hard work. But, no, because it allowed the show to be beautifully lit - The Café was shot on film incidentally, things just aren't shot on film any more. So we were able to make something that I hope looks absolutely gorgeous.

At one point we thought that maybe filming in a studio with a couple of painted backdrops would be the best option, but in the end Craig was the driving force saying 'look, I just think it will be such a shame - it's got such character - let's just have it so that we can see out of all the windows'... I said: 'What about people walking past in the back of the shot?', and he said, 'ahhh... we'll be alright'. Do you know what, he was right. We didn't have any security...

What, those are members of the public in the background?

Well, we used a couple were extras, but a lot are real people just walking past. For example, that group of grannies that are going past making each other chuckle - that's all real.

Cool. Craig Cash has done a great job with the camerawork... that leads us on to our final question though. It was reported earlier in the month that The Royle Family special wasn't happening this Christmas after all, as it's not finished. Is that your fault, for keeping Craig busy?

I don't think we can take the blame, ha ha. Do you know what, I don't know what's happening with that show because [at the time this interview was conducted] I haven't spoken to Craig. I did know a couple of days before the story hit the papers - I got a call from my agent to say 'listen, it's not happening for Christmas although they still want to do something, they just don't know when it's going to be yet.'

They haven't tended to make mistakes... I've got to be careful here, because I'm speaking purely speculatively... but I know the type of people they are, and if they didn't feel something was ready, or they didn't think something was going to be as high quality as they're used to delivering, they would rather not deliver than deliver something sub-standard... and that's why they keep writing brilliant stuff.