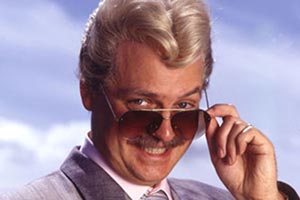 The strangely named Swiss Toni is an egotistical, elaborately dressed second-hand car salesman with his own showroom.

Although he appears to enjoy an ultra-high opinion of himself, Swiss is fraught with anxiety and uncertainty, painfully aware that his flash exterior is nothing more than a glossy spray job on a rather dodgy 'cut and shut'. He has huge trouble expressing emotion, but certainly has a fair amount of wit, comparing almost any situation or activity - from painting a wall to selling a car - to the act of "making love to a beautiful woman".

Geoff, an experienced car salesman at Swiss's garage, is an alcoholic and his boss is the only one who doesn't realise how bad his drinking problem is. His evenings consist of falling down stairs, kissing tables and urinating in bins.

Perhaps Swiss is purposely turning a blind eye to Geoff's dependence, as despite being extremely lazy and often intoxicated on the job it can't be denied that Geoff is a vital cog in the Swiss Toni's Motors machine - he is the only one who ever seems to manage to sell a car.

Paul is the office junior, slightly in awe of Toni and Geoff, and more than willing to learn all there is about selling cars and making love to beautiful women. Most things he doesn't know scare him - which basically is an awful lot... Everything from emus to wet food, the pop group Coldplay to iodine.

He lives with his girlfriend Cicely, someone whom he talks about a lot in between his theories about women and relationships, much to the annoyance of the other staff.

Ruth is Swiss's long-suffering wife. He thinks she is lovely, gentle, kind and beautiful... and a miserable ***** from hell!

Series 2 sees Ruth having left Swiss, and his attempts to win her back. It seems that fine wine and Belgian chocolates weren't enough on their own.

The only member of the Swiss Toni's Motors team who has anything actually approaching a healthy sex life is Miranda. She is a sexy and worldly-wise young woman who holds the place together, doing the paperwork, administration and accounts.

Swiss employed her as part of his "continued commitment to equal opportunities in the workplace", however the real reason is because "she's got a cracking bust and legs that go up to her armpits".

Swiss considers his mother a monster: "Her heart isn't made of stone, it's made from quick-setting concrete".

She lives in a fantasy world where it's still the 1920s and has brought up her only son Swiss to be a cringing neurotic individual who is utterly unable to engage with his own emotions. The fact she called her son "Swiss" must go some way to show that she is someone who probably should be avoided.