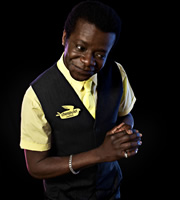 Pop superstar Robbie Williams reveals his long-standing professional relationship with stuntman extraordinaire Paul "The Hammer" Preston. Viewers learn that not only did Paul double for Robbie in one of his videos but he also occasionally used to take his place performing one of his most famous songs...

Stephen makes his weekly video call home to his mum, Buki and viewers meet his cousin, Kunle, who reveals that declaring to immigration at the airport that he was in the UK to find a wife caused him more trouble than expected, but he hasn't let the rubber gloves and questions deter him.