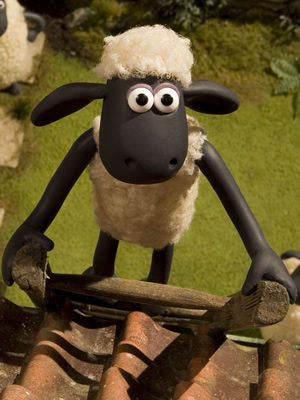 A survey involving over 40,000 votes has named Shaun The Sheep at the nation's most popular BBC children's character.

The claymation sheep triumphed over characters including Postman Pat, Bob the Builder and Paddington Bear in the poll conducted by The Radio Times.

Shaun The Sheep first appeared in Nick Park's 1995 Oscar-winning Wallace & Gromit film A Close Shave before going on to his own CBBC show in 2007.

The cartoon, which has now run for over 100 episodes, features the adventurous sheep and his fellow field-based friends on Mossy Bottom Farm trying to evade the attentions of their short-sighted farmer.

The comedy series, which has won multiple high-profile awards, is now broadcast in over 170 countries around the world.

Creator Richard Starzak says: "I'm chuffed, flattered and delighted, on behalf of everyone who has worked on Shaun the Sheep, for this honour. Many BBC animated characters were a big and important part of my childhood. It's amazing to think that Shaun will be part of so many people's happy memories. I'm so grateful to the readers of the Radio Times for voting for Shaun. You've made me very happy!"

Radio Times editor Ben Preston commented: "The huge response to our poll shows how dearly we cherish our television memories of childhood. Every generation has a favourite which lingers for a lifetime. Our winner, Shaun the Sheep, will be remembered in 50 years' time, just as the children of the 80s voted for Postman Pat, and Sooty and Sweep remain hugely popular almost 60 years after they were first broadcast. It's a testament to the enduring quality of British children's television that a contemporary character topped the poll in a shortlist filled with classic programmes from the last seven decades."

The survey was inspired by Here's One We Made Earlier, a new exhibition at The Lowry in Salford focused on BBC Children's broadcasting. The full top ten from the poll is:

Aardman Animation is now working on a Shaun The Sheep Movie at its studios in Bristol. The film will open in cinemas across the country on the 6th February 2015. It sees Shaun's mischief inadvertently lead to the farmer being taken away. Shaun, Bitzer and the flock have to go to the big city to rescue him, setting the stage for an epic big screen adventure. Here's the trailer: